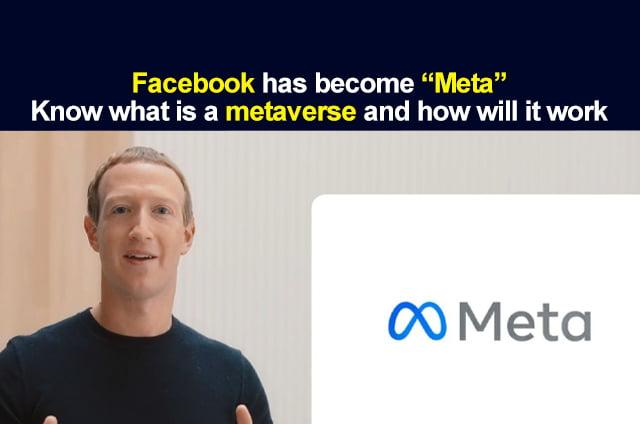 Facebook is not Facebook anymore. One of the biggest tech giants in the world has rebranded itself changed its name to “Meta”.

On Thursday, Facebook said that it would rebrand itself as “Meta”. The company has also said that the change would bring together all of its different apps and technologies under one single brand. However, the CEO of the company, Mark Zuckerberg has clarified that the corporate structure of the company will not change.

Facebook CEO Mark Zuckerberg said, “It is time for us to adopt a new company brand to encompass everything that we do. To reflect who we are, and what we hope to build. I am proud to announce that starting today, our company is now “Meta”. Our mission remains the same. It is still about bringing people together. Our apps, our brands, they are not changing either. And we are still the company that designs technology around people.”

The term “metaverse” is the latest buzzword today. A metaverse is where the digital and the physical world come together, and that is what exactly Facebook wants to do.

The Guardian reports that metaverse is a space where the digital representation of people interact at work, meeting in their office, going to concerts and even trying clothes.

This move by Zuckerberg is the first step to bringing the internet to life in 3D.  The company’s CEO Zuckerberg has described it as a virtual environment. It is not just the screen but a whole environment.

Metaverse would be a world of interconnected virtual communities where people can meet, play and work. You will need virtual reality (VR) headsets, smartphone apps, augmented reality glasses.

Who coined the term metaverse?

The term metaverse was coined in the novel “Snow Crash”. The American Science fiction writer Neal Stephenson wrote this novel in the year 1992.

What could be done in a metaverse?

Going to a virtual concert, buying or selling digital clothing, viewing and creating digital artwork, an online trip. It can also be helpful for the work-from-home culture.

The company says that wearable smart glasses will become the gateway to the metaverse. It is to be noted that the company has earlier announced that it will soon launch a new pair of smart glasses in collaboration with Ray-Ban and it had released $299 Ray-Ban Stories.

Facebook has also clarified that metaverse will be a collective project that goes beyond a single company. The company has informed that it will be created by people all over the world, and open to everyone.