Tough challenges before Channi and Sidhu to implement “18-point agenda” 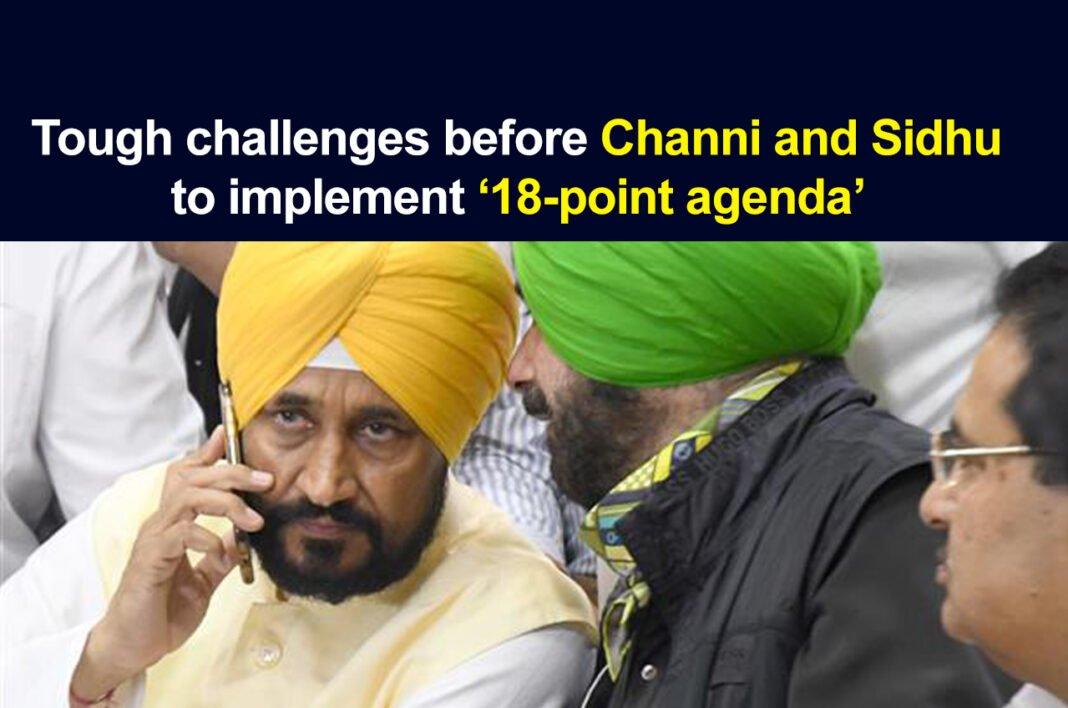 The new chief minister of Punjab Charanjit Singh Channi will have to face different challenges as there are only three and a half months left to prove himself. The assembly elections in Punjab are proposed in February 2022. However, the model code of conduct will be implemented a month and a half before. Therefore, Channi and Sidhu have time till December 2021 to complete the 18-point agenda they have been talking about.

The implementation of Sidhu’s Punjab Model is not going to be easy at all. Eliminating the sand mafia is necessary as Sidhu has been saying that it can end the state’s economic crisis. Other than that, eradicating drugs from the state is a need of the hour. They also need to focus on employment generation and reduction in power bills by cancelling Power Purchase Agreements with private companies. Also, one should not forget the farm laws.

It is to be noted that while electing Navjot Singh Sidhu as the PPCC president, the party high command had given an 18 point special agenda to Captain Amarinder Singh. The question is that how many of these issues will be resolved?

During the tenure of the SAD-BJP coalition, Power Purchase Agreements with private companies were signed. New thermal plants in Talwandi Sabo, Rajpura and Goindwal Sahib were established. Sidhu claims that because of PPA, Punjab has to buy electricity at high rates and there is a need to cancel PPA. Amarinder Singh as CM of the state had questioned that how will the need for 14,000 MW of electricity be fulfilled after the cancellation of PPA?

Both Channi and Sidhu will have to look into the matter. CM Channi has reportedly announced waiving of water and sewerage bills and promised a reduction of power bills.

Sidhu and company have been raising the point that there’s no policy in Punjab against sand mafia. To understand the model of Tamil Nadu and Telangana, Sidhu went there and submitted his report to the Cabinet. However, the report was dismissed by Captain. Sidhu has also been saying that the government authorities should mine sand (instead of private companies) and sell it in the market. This way, the state will also come out of the financial crisis. It will be interesting to see what Sidhu and Channi do in these three months.

Congress had promised to waive off the loans of farmers before it came into power in the year 2017. As per the reports, in Captain’s tenure of four and half years, only 5.6 lakh farmers’ loans of Rs. 4,623 crore could be waived off. Other than that, the loans of 2.68 lakh labourers of Rs. 526 crore were also waived off.  This has also been pointed out in the 18-point agenda that was presented to Amarinder Singh.

A lot of cabinet ministers have been saying that Punjab is being dominated by the liquor mafia. Illegal liquor has been sold in different parts of the state which is affecting the government treasury. Eradicating this issue in such a short period of time would be very difficult for Channi and Sidhu.

This was another promise that Congress made when it came into power in 2017. However, the public has been criticising Captain’s government for not fulfilling this promise. Navjot Singh Sidhu and other MLAs including Channi had earlier questioned Amarinder Singh about it.

The employees on strike

ASHA workers, contract workers, Punbus and Roadways employees etc. in the state are also protesting for their demands. The reports suggest that the number of these employees is more than one lakh. Navjot Singh Sidhu has been saying that Amarinder Singh should fulfil their demands as well. Now, the responsibility is on Channi.

This is one of the biggest issues that Punjab has been facing for a long period of time. Deputy CM Sukhjinder Singh Randhawa and Navjot Singh Sidhu have been blaming Bikramjeet Singh Majithia for drug peddling in Punjab. They have also blamed Amarinder Singh for deliberately not taking any actions against him. Now, people will have an eye on Sidhu, Channi and Randhawa. They will see what the trio will do in this regard.

The public in Punjab has been criticizing the Akali government for issuing permits for their private buses. Channi and Sidhu were also amongst those condemning Akali government. Will they be able to put an end to the transport mafia in the state?

Sidhu had earlier said that if the central government was not providing MSP to farmers for their crops, then the state government should do it on their behalf. Now, as the tables have turned, the big question to ask is that whether Channi can do it for the farmers or not?