Meet Sufiya Khan, first woman to run from Manali to Leh in 156 hours 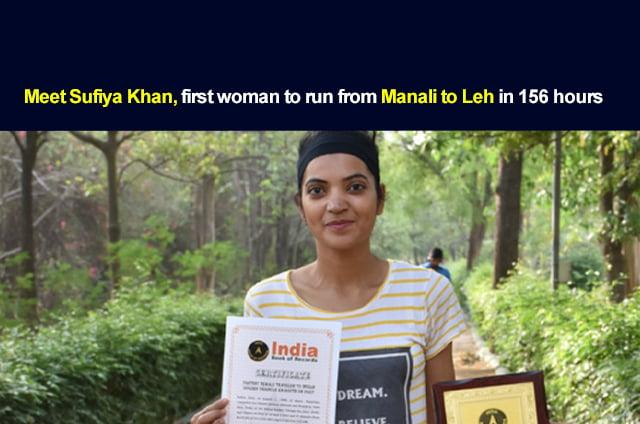 Sufiya Khan has become the first female runner in the world to complete the Manali-Leh ultramarathon. The lady completed the marathon in less than a week under extreme terrains and weather conditions.

It is to be noted that the distance from Manali to Leh is 480 kilometres and Sfiya covered it in 156 hours. She started the marathon on September 25 and completed it on October 1.

Describing her experience, Sufiya reportedly said that she acclimatized herself for the run 15 days before. She focused on several strength exercises and also, Yoga and Pranayam to improve her lungs’ efficacy.

Sufiya said that at one point, her oxygen levels fell to 59 per cent during the run. She fainted and her support team helped her run again.

Sufiya Khan is a two-times Guinness World Record holder. In the year 2019, she became the fastest female runner to run along the “The Indian Golden Quadrilateral Road.”

Born in Ajmer, Rajasthan, Sufiya was only 16 when her father died. Her mother raised her. She had also worked as a ground handler at the Delhi International Airport for 10 years. However, she quit her job in 2019 and followed her passion for running.

Sufiya says that now, she wants to circumnavigate the world by running and she has already started preparing for it.