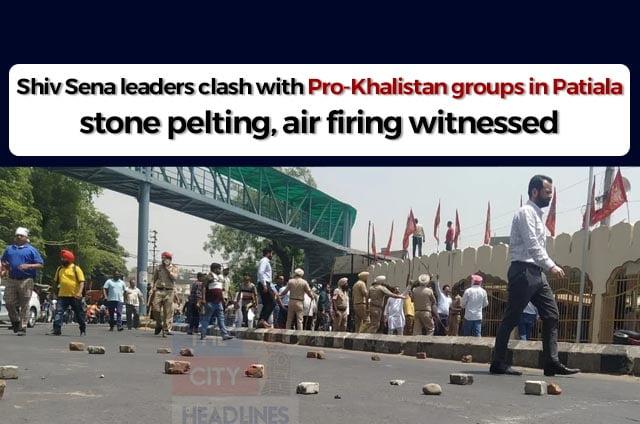 A serious clash has been witnessed between Shiv Sena leaders and pro-Khalistan Sikh groups in Patiala district on Friday, April 29. Heavy stone pelting, attacks have been witnessed in the city. As per the reports, the famous Kali Mata Mandir was also attacked amid the clash.

Both the groups were seen sloganeering and waving swords. Preparations were being made to burn an effigy of Khalistan as per the schedule set by Shiv Sena on Friday at Arya Samaj Chowk in Patiala. Meanwhile, the situation got tense. After getting the information, pro-Khalistani Sikh groups reportedly reached the spot and started protesting.

SHO Karnvir Singh also reportedly got injured with a sword during the clash. SSP Dr. Nanak Singh also fired several rounds during to control the situation. It is worth noting that some web channels were airing the news of SHO’s hand being chopped off. Patiala DC Sakshi Sahni has termed these claims as baseless.

Punjab Chief Minister Bhagwant Mann also took to Twitter and spoke about the matter. He wrote, “The incident of clashes in Patiala are deeply unfortunate. I spoke with the DGP, peace has been restored in the area. We are closely monitoring the situation and will not let anyone create disturbance in the State. Punjab’s peace and harmony is of utmost importance.”