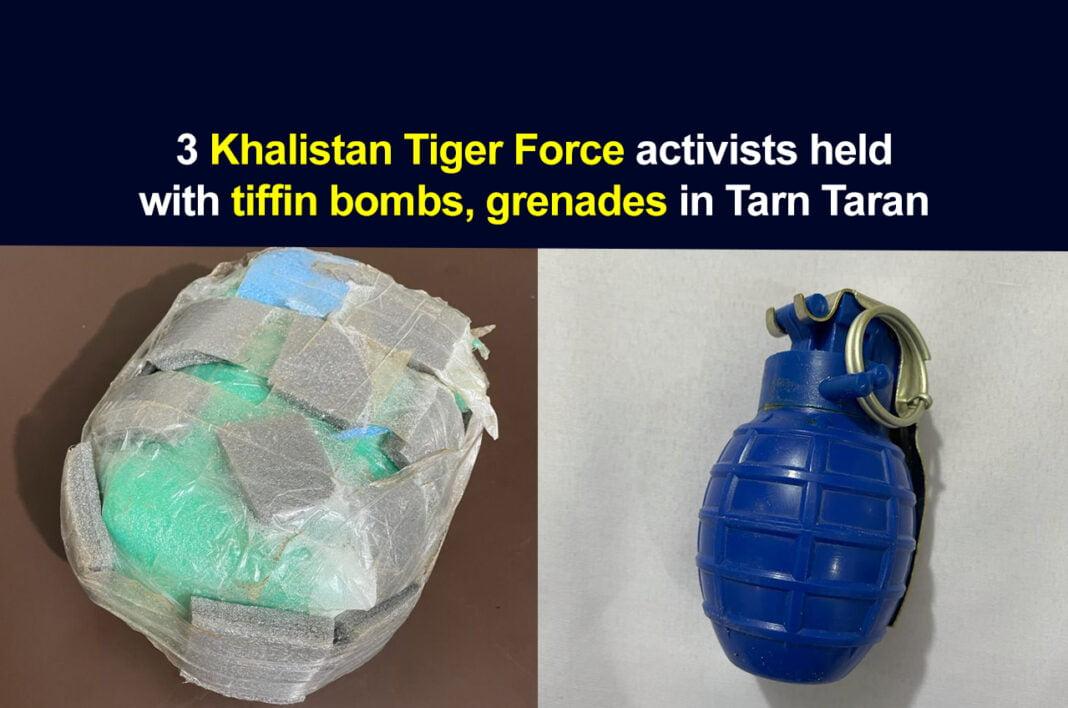 Punjab Police has busted another militant module backed by Khalistan Tiger Force with the arrest of its three activists from village Bhagwanpur in Bhikhiwind area of Tarn Taran. The Police have also recovered two boxes packed in foam that appeared to be tiffin bombs, two hand grenades (86P) and three 9mm pistols from their possession. This is the sixth tiffin bomb recovered from Punjab in one and a half months.

The arrested have been identified as Kanwarpal Singh, Kulwinder Singh and Kamalpreet Singh, all residents of Moga. Kanwarpal disclosed that he had returned from Canada two weeks back.

The development came four months after the Punjab Police had arrested three activists of the KTF involved in several crimes including the murder of a Dera Premi and firing on a priest. The trio had been acting on the directions of Hardeep Singh Nijjar, KTF chief based in Canada.

Preliminary investigations have revealed that the module members had reached Tarn Taran to retrieve the dumped militant hardware consignment, on the directions of Canada-based Arshdeep Dalla, who is a close aide of Hardeep Nijjar.

ADGP Dhoke said that the accused revealed that after retrieving the consignments, they were awaiting further instructions from Arshdeep Dalla. Notably, Kamaljit and Lovepreet, who were earlier arrested in Moga, had introduced the accused persons to Arshdeep.

An FIR has been registered under section 307 of the Indian Penal Code (IPC), section 475 of the Explosives Substance Amendment Act, sections 13, 18, 20 of the Unlawful Activities (Prevention) Act (UAPA) and sections 25, 54, 59 of the Arms Act at Police Station Bhikhiwind.

Earlier, on August 8, the Amritsar Rural police had recovered five hand grenades along with a tiffin bomb from village Daleke in Lopoke.

A tiffin bomb was also seized in Ajnala on August 8 as it was to be used to blow off an Oil Tanker.

Kapurthala Police had also recovered a similar consignment consisting of two live hand grenades, one live tiffin bomb and other explosive material from Phagwara on August 20.

The fourth tiffin bomb was recovered from fields in village Dharmpura of Fazilka on September 18, 2021.