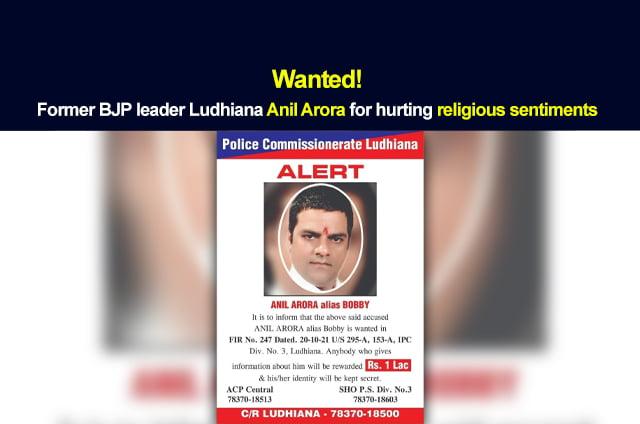 The Ludhiana Commisionerate Police has declared former BJP Minister Anil Arora “most wanted”. He allegedly used abusive words for Sikh Guru Nanak Dev Ji. Also, Ludhiana police have declared that the person giving Anil Arora’s information would be rewarded Rs. 1 lakh. They have also said that the identity of the person would not be revealed.

For the last six days, Ludhiana police is trying to trace Anil Arora and his associates. In several areas of the city, various Sikh groups have been protesting against Anil Arora and demanding his arrest.

Recently, Anil Arora, along with his supporters, used abusive words for him and his father on social media. Since then, the Sikh leaders in Ludhiana have been protesting against him. On Monday, Smarala Chowk, one of the busiest areas of the city, was blocked by the Sikh community. The police assured them of arresting Anil Arora within 48 hours.

On Tuesday, Ludhiana police shared a poster with Anil Arora and his wife’s photo. He has been booked under sections 295-A, 153-A of the Indian Penal Code.

Also read: Aroosa Alam: They are a pact of “hyenas”, disgusted with Punjab Congress