Elections to be conducted in tight security, 785 critical polling stations in Ludhiana 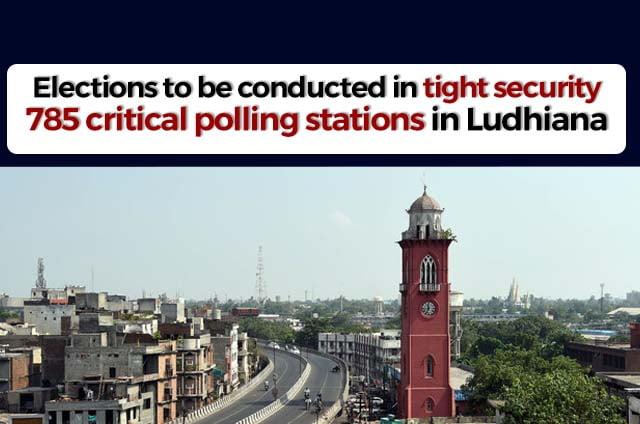 Only a few hours are left for the Assembly elections in Punjab, the preparations are going on in full swing and proper security arrangements have been made by the Ludhiana Police Commissionerate and the district administration.

A lot of fights, verbal spats,  and even stone-pelting have been witnessed in Ludhiana during the election campaigning. The one that has been in everyone’s eye, is Bains-Karwal’s clash in the Atam Nagar constituency.

Other than that, the BJP candidate from Gill constituency SR Ladhar was also attacked.

The Election Commission has declared several polling stations in Ludhiana, as “vulnerable” and some as “critical”. More police and paramilitary forces would be deployed on such polling stations.

Here is the list of the number of critical polling stations in each of the Assembly constituencies of Ludhiana.

Ludhiana Central is the most critical constituency

A lot of disputes have earlier been witnessed in Ludhiana Central constituency during the elections.

Atam Nagar is on everyone’s eye

Because of the Bains-Karwal clash, Atam Nagar is one of the most sensitive constituencies of Ludhiana. Several disputes, verbal spats, stone-pelting have already been witnessed in the Atam Nagar Assembly constituency.

The sitting MLA from Atam Nagar is Lok Insaf Party’s Simarjit Singh Bains. Congress has fielded Kamaljit Singh Karwal against him. SAD has given the assembly ticket to Harish Rai Dhanda. From AAP, Kulwant Singh Sidhu has been given the ticket.

In Ludhiana West constituency, there are 75 critical polling stations. Other than that, there are 15 vulnerable polling stations in Ludhiana. Bharat Bhushan Ashu is the sitting MLA from Congress. BJP has given the ticket to Bikram Sidhu. Gurpreet Gogi has received the ticket from Aam Aadmi Party. From Sanyukt Samaj Morcha, Tarun Jain Bawa is contesting the elections from Ludhiana West.

As many as 74 polling stations in Ludhiana North are vulnerable. The voters will witness tight security in the Ludhiana North constituency. Rakesh Pandey from Congress has won the assembly elections from Ludhiana North several times. From BJP, Praveen Bansal is up against him. RD Sharma has got the Ludhiana North ticket from Shiromani Akali Dal. AAP has given the ticket to Madan Lal Bagga.