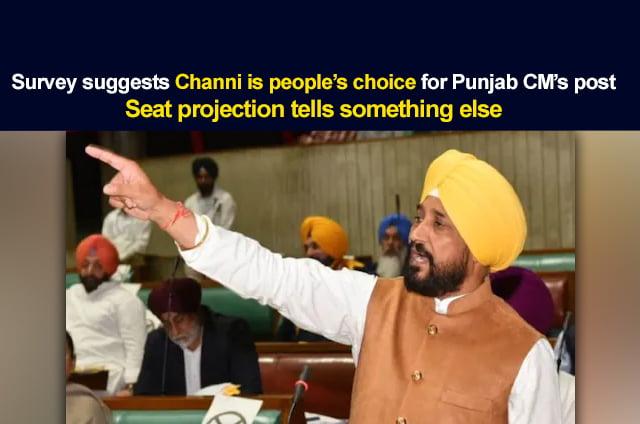 Seat projection tells something else

A recent survey by the CVoter and ABP News indicates that Aam Aadmi Party may emerge as the single largest party in 2022 Assembly Polls in Punjab.

Out of the total 117 seats, the survey suggests that AAP will win 51 seats and the ruling Congress will get 46 seats. The survey also suggests the Sukhbir Badal’s Shiromani Akali Dal will fall down to just 20 seats and BJP will not get any seats at all.

The CVoter’s tracker tells that the highest percentage for Punjab’s CM choice is of Charanjit Singh Channi with almost 31 and at the second position, there is Aam Aadmi Party Supremo Arvind Kejriwal with 20.8 percent. According to the reports, last month, the survey suggested that Arvind Kejriwal was at the top with 22.2 percent.

The major reasons for an increase in Charanjit Singh Channi and Congress’ popularity in Punjab are continuous announcements and reliefs offered by the current Chief Minister. Also, it is to be noted that AAP MLA Rupinder Ruby had joined the Congress party. Channi had also said that more from AAP would join Congress soon.

Another reason for the downfall of Kejriwal’s AAP in Punjab is that they had not yet revealed their CM face. During his visit to Ludhiana last month, Arvind Kejriwal had said that the party would soon announce their face for the CM’s seat. Bhagwant Mann, AAP’s party chief in Punjab, is what people are still expecting as CM’s face.

Also, the reports suggest that had it been between Captain Amarinder Singh and Sukhbir Badal, Bhagwant Mann would have had a strong impact in the state.

People also used to criticise Amarinder Singh for not engaging with people and now, the current Chief Minister Charanjit Singh Channi is completely opposite. That is also attracting many people in  Punjab.