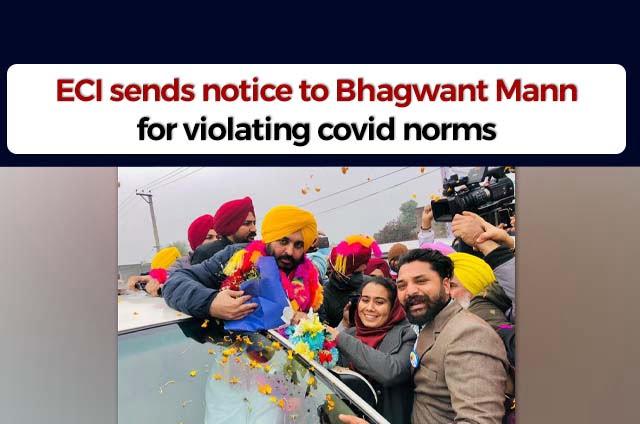 The Election Commission of India has sent a notice to AAP’s nominee for the Chief Minister post, Bhagwant Mann for violating the covid guidelines during a rally in Sangrur.

On Sunday, Bhagwant Mann was seen in a roadshow in Sangrur with the AAP candidate Narinder Kaur.

The Returning Officer sent him a notice and has said asked him to reply to the notice within 24 hours. In Ladda, Kanjhla, Mulowal, and Dhuri (from where Bhagwant Mann is contesting the Assembly Polls), many people warm-heartedly welcomed Bhagwant Mann.

Earlier also, the Election Commission has sent notice to Anmol Gagan Mann, AAP’s MLA candidate from the Kharar constituency. She along with Bhagwant Mann and Arvind Kejriwal were seen doing a door-to-door campaign.

AAP has announced Bhagwant Mann as their CM face. AAP supremo Arvind Kejriwal has said that in the televoting drive that the party conducted, Bhagwant Mann received over 93 percent votes.

Bhagwant Mann will contest the elections from the Dhuri constituency. In Punjab, elections will be conducted on February 20 and the results will be announced on March 10.