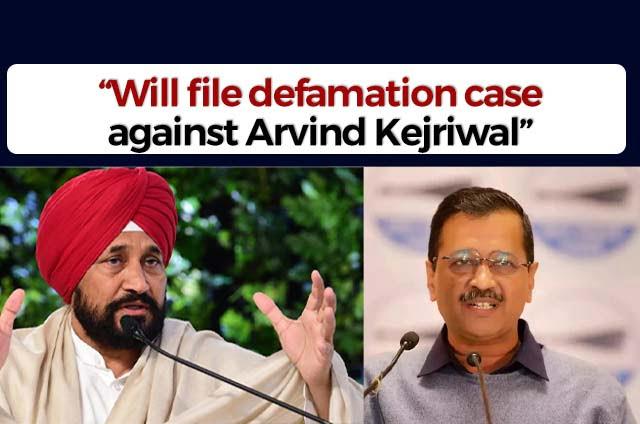 Charanjit Singh Channi on Friday said that he will file a defamation case against Delhi Chief Minister Arvind Kejriwal.

He said that Arvind Kejriwal had clearly said that Channi is a dishonest man, not an “Aam Aadmi”. Charanjit Singh Channi said that he asked for permission from Congress and now, he will file a defamation case against him.

CM Channi also questioned Arvind Kejriwal, “How much money he had?”

He said that more than 200 crores are spent on posters and banners of the Aam Aadmi Party in Punjab. On every TV channel, AAP’s ads are running. “Where is this money coming from?” Channi asked.

A video has been posted on the official Facebook page of AAP Punjab. In the video, it was written, “Channi is a thief”. Other than that, there’s a picture of Charanjit Singh Channi with his nephew.

As a part of the illegal sand mining case, ED had raided Channi’s nephew’s home and found Rs. 4 crore. Charanjit Singh Channi had termed the raid as a way of pressurizing Congress ahead of the elections.

CM Charanjit Singh Channi said that Arvind Kejriwal should fairly fight the elections. Further, he said, “Why didn’t Arvind Kejriwal post a photo with his nephew when he was caught with Rs. 130 crore, and called himself “dishonest”?”

Moreover, Charanjit Singh Channi also questioned the televoting drive of the Aam Aadmi Party. He said that the claims were false that AAP received over 21 lakh suggestions to announce the party’s Chief Minister candidate.