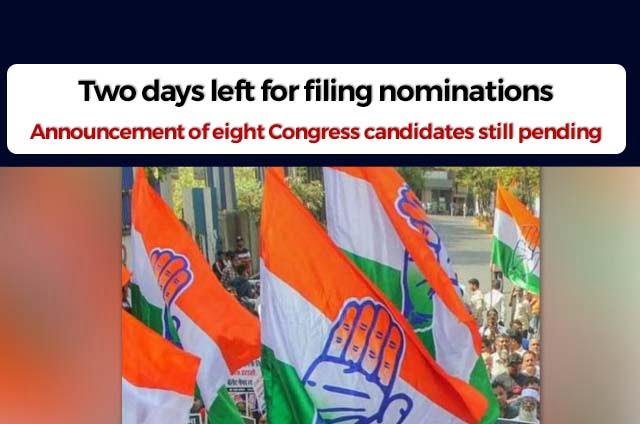 The nomination process for Punjab Assembly elections is undergoing and all the major political leaders are filing their nomination papers.

Only two days are left for the nomination process, however, Congress has not announced its candidates for eight Assembly constituencies. The last date to file nomination papers in Punjab is February 1. But the suspense in eight assembly constituencies, including Ludhiana South, continues as Congress has not announced its candidates.

Of the total 117 assembly constituencies in Punjab, Congress has announced its candidates for 109 seats.

Following are the seats on which Congress has not announced its candidates till now.

On Saturday, Congress has appointed four poll observers in Punjab. Sanjay Nirupam, former Congress chief from Mumbai district and Arjun Modhwadia, former leader of opposition in Gujarat, have been appointed for the 69 seats of the Malwa region.

Uttam Kumar Reddy, former Telangana Congress Chief, will look after the 25 seats of the Majha region. Former Congress President in Himachal Pradesh, Sukhwinder Singh Sukhu, is the AICC observer for 23 seats of the Doaba belt.

ALSO READ: At Ludhiana Railway Station, announcements are being made in Bhojpuri, Bengali languages