Tough fight for Bharat Bhushan Ashu| His close aide, and a former cabinet minister against him 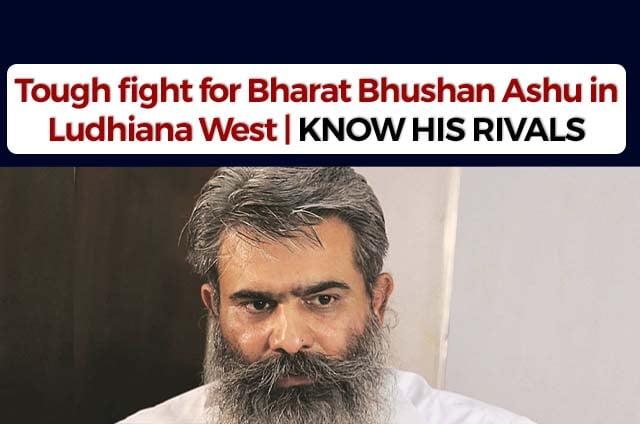 Ahead of the 2022 Assembly elections in Punjab, almost every political party has announced its candidates in Ludhiana constituencies. In Ludhiana West constituency, Bharat Bhushan Ashu is the sitting MLA and this time, it would be a tough fight for him to win the elections.

One of his close friends, who left the Congress had received the MLA ticket from Aam Aadmi Party against him in his constituency Ludhiana West. Other than that,  SAD has fielded a former Cabinet Minister in Ludhiana West against Bharat Bhushan Ashu.

Other than that, an advocate and an industrialist are also fighting against Bharat Bhushan Ashu to win the Ludhiana West constituency.

This time, it is not just Congress vs Shiromani Akali Dal in Punjab, especially in Ludhiana West. This time, there are five parties fighting against each other to win the seat.

In Captain Amarinder Singh and Charanjit Singh Channi’s government, Bharat Bhushan Ashu was given a cabinet rank. He was the Food and Civil Supplies Minister. Also, he has won the elections from Ludhiana West seat twice (in the year 2012 and then in 2017).

Bharat Bhushan Ashu started his political journey in the year 1997. He has been councillor thrice and been the Member of the Legislative Assembly twice.

2012: He got the MLA ticket for the first time from Ludhiana West constituency and defeated Rajinder Bhandari of Shiromani Akali Dal. At that time, SAD had regained power in the state and won the elections.

However, being a new face for the MLA seat, Bharat Bhushan Ashu still managed to win the seat.

This time, all the political parties have chosen their best stalwarts against Bharat Bhushan Ashu.

He is an advocate and a senior political leader of the Shiromani Akali Dal. In the year 1997, Mahesh Inder Singh Garewal won the Assembly elections from Ludhiana West seat. Other than that, he has been the political advisor to the former Chief Minister Prakash Singh Badal.

He has a stronghold amongst the Sikh voters in the Ludhiana West constituency. Hence, Mahesh Inder Singh Garewal can also give a tough fight to the sitting MLA Bharat Bhushan Ashu.

He has remained Ludhiana district president of Congress and also, has been elected councillor four times. Other than that, he has also served as the chairman of Punjab Small Industries and Export Corporation.

The party leaders had clearly said that they would make sure that they represent educated candidates from different fields.

Tarun Jain Bawa is one of them. He may get the support of those supporting farmers for a long time since their agitation against the three farm laws.