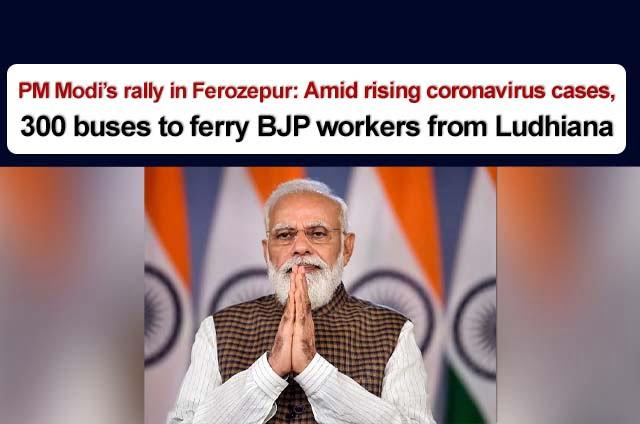 BJP chief in Ludhiana, Pushpender Singhal held a meeting with the state in-charge Dushyant Gautam, other party officials and workers at the district level.

According to the reports, the state in charge has given a target to take 300 buses and 15,000 workers from Ludhiana to the rally in Ferozepur.

Other than 300 buses, it is reported that over 250 cars from Ludhiana district will also visit Ferozepur.

To lay the foundation stone of different development projects, Prime Minister Narendra Modi will visit Punjab on Wednesday, January 5. The reports suggest that projects worth more than Rs. 42,750.

Amid the continuous surge in coronavirus cases in Punjab, thousands of people are expected to visit Prime Minister Narendra Modi’s rally on Wednesday.

The state government has also issued various guidelines including night curfew and closure of schools and colleges till January 15. However, in the guidelines issued, nothing has been announced related to political gatherings and rallies.

On Monday, January 3, 419 new coronavirus cases have been reported in Punjab. An exponential surge has been witnessed in the covid numbers of the state within a week.