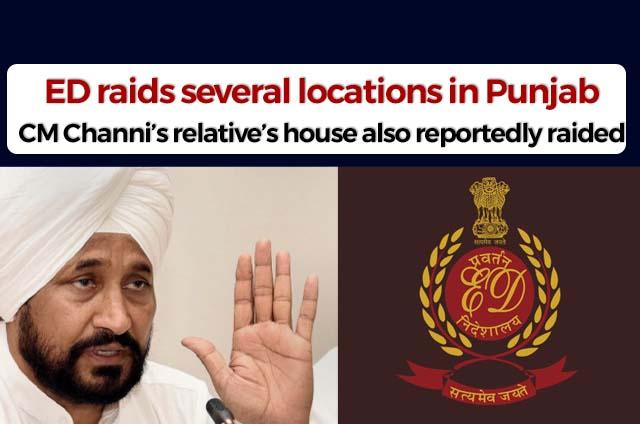 In the poll-bound state of Punjab, the Enforcement Directorate on Tuesday, January 18, has raided 10-12 different locations investigating a case related to money laundering. The raids have been conducted against the companies that are allegedly involved in illegal sand mining.

According to the reports, some 10-12 different locations in Punjab related to this illegal sand mining case. The actions are reportedly being taken under the provisions of the Prevention of Money Laundering Act.

It is to be noted that the election date in Punjab has been rescheduled. In the poll-bound state of Punjab, people will cast their votes on February 20.

Earlier, the Election Commission of India had announced February 14 as the date of elections in Punjab. However, several political parties, including BJP, Congress, BSP, SAD, requested ECI to change the poll dates.

On February 16, Guru Ravidas Jayanti will be celebrated. A large number of people from the SC community of Punjab are expected to go to Banaras for the celebrations. The vote share of the SC community in Punjab is approximately 32 percent. Therefore, the political leaders had asked the ECI to change the poll dates in Punjab.

Now, the elections in Punjab will happen on February 20.