“If you can’t keep your PM safe, how will you safeguard Punjab?” Amit Shah questions Channi 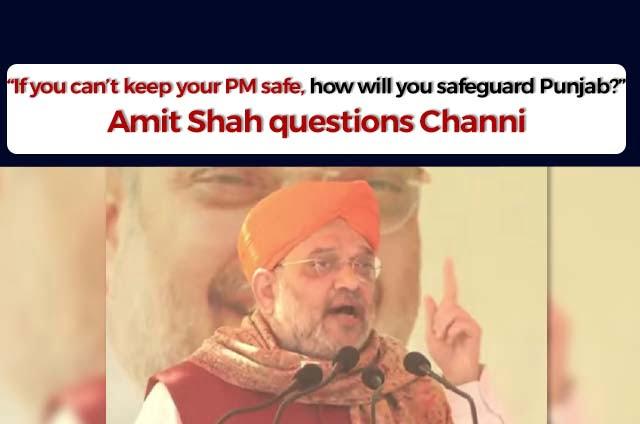 Addressing the rally, Amit Shah said that only the NDA government, under Narendra Modi’s leadership, can safeguard the border state of Punjab.

Amit Shah said asked if Charanjit Singh Channi can make Punjab a safe state. He said, “It is about the leadership of a nation, it is not making a comic movie.”

Further, he said, “Charanjit Singh Channi is dreaming of forming a Congress government in Punjab again.” He said, “A Chief Minister who cannot provide a secure route to the Prime Minister of India, can he provide  security to Punjab?”

Addressing the rally, Amit Shah also said that if AAP is voted to power in Punjab, all the terrorists would be revived. “He only does “auto-politics” and does not care about security.”

Amit Shah further said that a government is formed under Narendra Modi’s leadership in Punjab, the people here won’t have the fear of terrorism. They can sleep peacefully.

Will make Narcotics Control Bureau branches in 4 cities of Punjab

Union Home Minister Amit Shah said, “We will establish Narcotics Control Bureau branch offices in 4 cities of Punjab if we come to power. For drug prevention in the state, we will form a task force in every district of Punjab.”