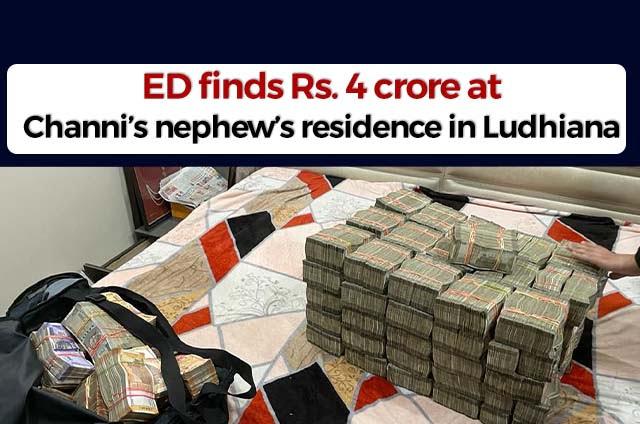 During the course of the search at CM Channi’s nephew & his associates, some property-related documents and Indian currency worth more than Rs. 6 crores have been found, the ED officials report.

Today, the ED raided Bhupinder Singh and other associates’ residences in Ludhiana and has recovered the money in an alleged sand mining case.

In the FIR relating to Charanjit Channi’s nephew, a team comprising of officials of the Mining Department, Civil Administration, and Police Department made a surprise check on March 7, 2018.

On the basis of a complaint received at the Police Station – Rahon, SBS Nagar regarding illegal sand mining, this surprise check was conducted.

Consequently, it was found that several mines were being excavated by various machines and mining was being carried out beyond the designated area. Subsequently, the mining operation at Malikpur mining site was stopped and also the approval of the weighment Slips was stopped by the team.

As per the FIR, apart from Malikpur, illegal mining activities were also carried out at Burjtahl Das, Barsal, Lalewal, Mandala and Khosa.

Not only Ludhiana, but the ED has raided several locations in Punjab and Haryana as well.

To these raids, several reactions from Congress were seen today.

See how CM Channi reacted to the raid