Channi is the CM candidate, but what would be Navjot Sidhu’s next move? 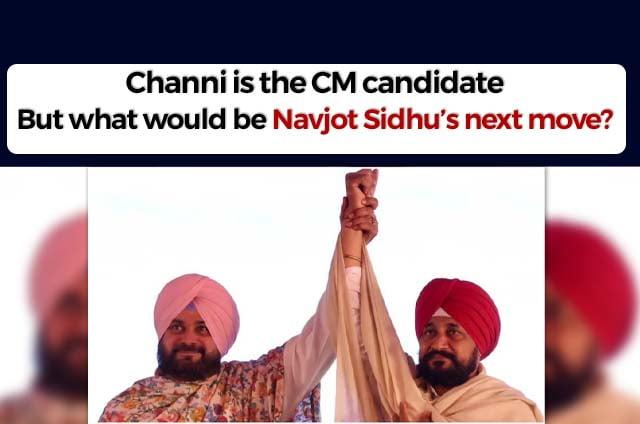 On February 6, Congress General Secretary Rahul Gandhi announced the party’s Chief Minister candidate for the Assembly elections in Punjab. He said that Punjab needs a Chief Minister who understands poverty. He announced Charanjit Singh Channi as the CM candidate in Punjab.

In his 111 days long tenure as Chief Minister, Charanjit Singh Channi gained a lot of popularity amongst the people of Punjab. He was the first one from the Schedule Caste Community to become the Chief Minister of Punjab.

After a long wait, Punjab Congress has announced its CM candidate. However, the question is, what would be Navjot Singh Sidhu’s next move.

Before Rahul Gandhi made the announcement, Navjot Singh Sidhu took to Twitter and said that all will abide by Rahul Gandhi’s decision.

A lot of time, he has even criticised Charanjit Singh Channi’s announcements and moves. A few days ago as well, Navjot Singh Sidhu said that those at the top want a “weak Chief Minister”.

Navjot Singh Sidhu has introduced a Punjab Model through which he claims to end sand and liquor mafia from the state. Even Charanjit Singh Channi yesterday spoke about it.

Sidhu said that he has no greed for the CM post and all he wants is Punjab’s development. Also, addressing the party workers and media from the stage in Ludhiana, Navjot Singh Sidhu asked Rahul Gandhi to make him “Arbi Ghoda”, and not a ‘Darshani Ghoda’.

Further, Sidhu said, “In my 13 years of association with Bhartiya Janta Party, I was just used as a campaigner. I respect Rahul Gandhi’s decision,  and will continue to do so.”

ALSO READ: “Those making excuses to do election duties will be given early retirement”, says Ludhiana DC