BREAKING NEWS: Punjab residents to get 300 units of free electricity from July 1 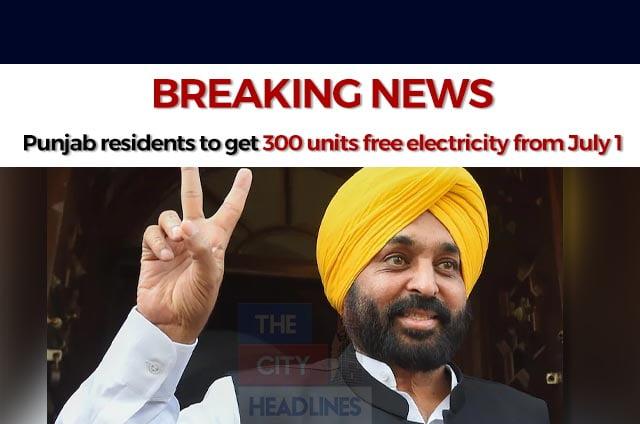 Chief Minister of Punjab Bhagwant Mann on Saturday formally announced that the state residents will get 300 units of free electricity from July 1.

On Thursday, while addressing the media in Jalandhar, Chief Minister Bhagwant Mann had said that the residents of Punjab will get some good news on April 16. Today, the Punjab government has made this announcement of providing 300 units of free electricity to the residents of the state.

Earlier this week, Chief Minister Bhagwant Mann along with Chief Secretary of the state, Anirudh Tewari, had a meeting with Delhi CM Arvind Kejriwal to discuss the modalities of providing free power.

As per the reports, Punjab is already under a debt of Rs. 3 lakh crore. If the state government provides 300 units of free electricity to the residents, then it will add a burden of Rs. 5000 crore annually on the state exchequer.

Other than that the AAP government has also promised to provide Rs. 1000 each every month to every woman above 18 years of age. The reports suggest that this would also cost over Rs. 15,000 crore annually.