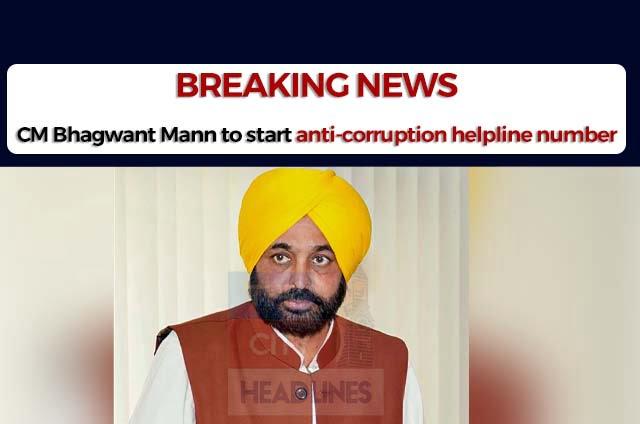 Punjab Chief Minister Bhagwant Mann has now taken a major step to eradicate corruption from the state. In a tweet, Bhagwant Mann said that on March 23, the Martyrdom Anniversary of Bhagat Singh, the AAP government will launch an anti-corruption helpline number.

Further, Bhagwant Mann wrote that this would be his personal number.

He wrote, “On the martyrdom day of Bhagat Singh ji, we will release the anti-corruption helpline number. That will be my personal WhatsApp number. If anyone asks you for a bribe, send it to me by recording a video/audio of it. Strict action will be taken against the corrupt. Corruption will no longer work in Punjab.”

Earlier today, Bhagwant Mann had said that a major “pro-people” announcement would be made for the betterment of Punjab. Now, Bhagwant Mann has announced that an anti-corruption helpline number would be introduced. If anyone asks for a bribe, people would be able to send the videos and photos through that number.”

Today, Bhagwant Mann took the oath as MLA in Punjab Vidhan Sabha. Yesterday, he was sworn-in as Chief Minister of Punjab at Khatkar Kalan village. From there, he said that his government would start work immediately as already, it was 70 years late.

ALSO READ: Over 100 families in Khatkar Kalan have settled abroad | Here’s the reason