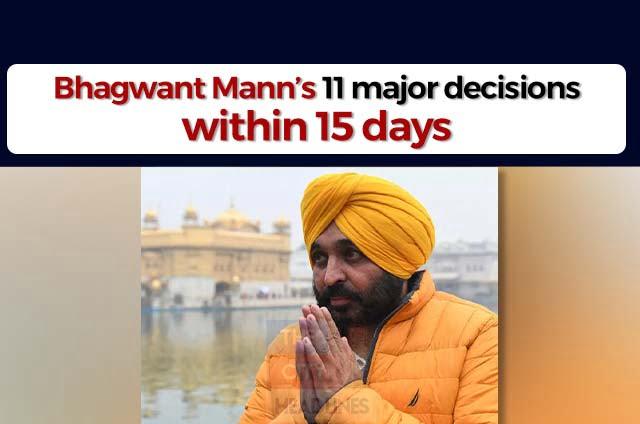 Just within 15 days, a lot of decisions have been made by Aam Aadmi Party in Punjab which is just elected to the government by the people of the state.

Some are focused on improving the employment rate in the state while some focus on eradicating corruption from the state.

Have a look at some of the major decisions made by Bhagwant Mann’s government within the first fifteen days.

Reduction in the security of the ex-ministers, MLAs

One of the first decisions that Bhagwant Mann’s government took was that it reduced the security provided to the ex-MLAs, and ex-ministers, especially those of Congress. The security of as many as 112 ex-MLAs, ministers have been reduced since Aam Aadmi Party came to power in Punjab.

Bhagwant Mann also announced that 25,000 more government jobs would be provided for the youth of Punjab and the bigger vision is to stop the youth to settle abroad.

One MLA, one pension

In the government offices of Punjab, pictures of Dr. BR Ambedkar and Bhagat Singh would be placed. Bhagwant Mann also took his oath as the Chief Minister in Khatkar Kalan village, the ancestral village of  Bhagat Singh.

State holiday on the Martyrdom of Bhagat Singh, Sukhdev and Rajguru

On March 23, the Bhagwant Mann government announced a public holiday in the state in memory of Bhagat Singh, Sukhdev and Rajguru.

Punjab Chief Minister Bhagwant Mann has also announced that 35,000 employees working on a contractual basis, will be regularized in the state.

To fight against corruption in the state, Bhagwant Mann’s Punjab government started an anti-corruption helpline number to address grievances. Also, some strict actions have been taken against the employees in the administration and the police department after this helpline number has been launched.

Bhagwant Mann also announced that all the assembly sessions of the state would be broadcasted live. He said that the people of Punjab must know if the representatives they have chosen are raising their issues or not.

AAP government in Punjab also announced that door-step delivery of ration will be initiated in the state. He said that people won’t have to stand in long queues to get ration. Employees will call the people and provide ration at their doorsteps.

Compensation worth Rs. 101 crore for farmers

Bhagwant Mann also announced that compensation worth Rs. 101 crore would be provided to the farmers of Punjab.