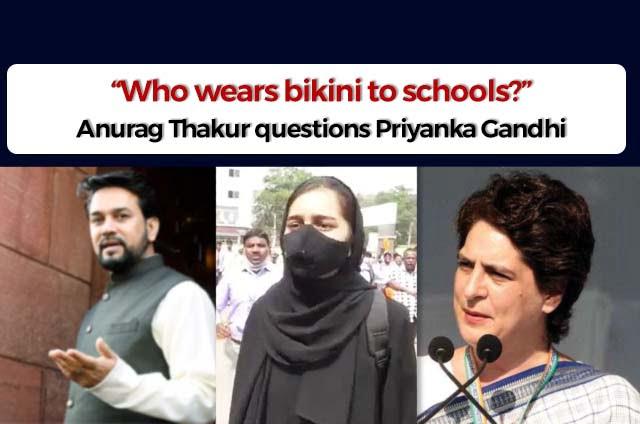 Union Minister Anurag Thakur has now reacted to Priyanka Gandhi’s tweet, in which she wrote that girls have the choice to wear anything they want.

In an interview with Times Now, Anurag Thakur questioned, “Who wears bikini to school and college?”

He said, “It is a woman’s choice to wear a saree, a suit or a jean. We are in a democracy. But educational institutes have uniforms. What does Priyanka Gandhi want to say?”

On Wednesday, February 9, Priyanka Gandhi took to Twitter and wrote, “Whether it is a bikini, a ghoonghat, a pair of jeans or a hijab, it is a woman’s right to decide what she wants to wear. This right is GUARANTEED by the Indian constitution. Stop harassing women.”

The girl was also seen chanting “Allah Hu Akbar” as she was being heckled outside the college. She reportedly said that she was responding to the mob’s “Jai Shree Ram” chants.