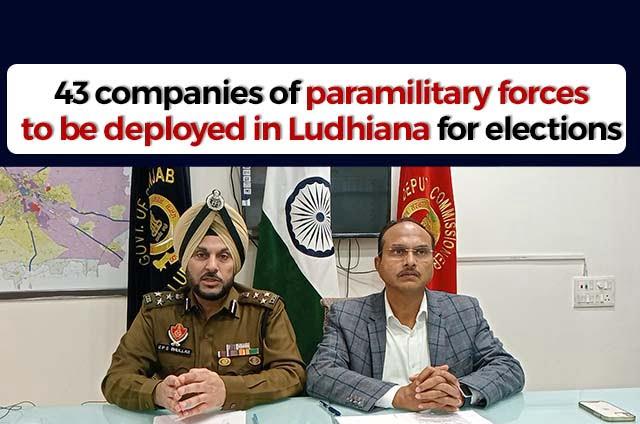 In a press statement issued here today, Ludhiana Deputy Commissioner Varinder Kumar Sharma said that the district administration was keeping a close watch on the activities of all candidates.

DC has warned all the candidates that strict action would be taken if any person or the candidate tries to take law into their own hands.

The Deputy Commissioner informed that around 20,000 officials have been deputed for election duty. Further, he said, “Model Code of Conduct is properly enforced. 9 static surveillance teams each, 9 flying squad teams and 3 video viewing teams each have been deputed in all 14 assembly constituencies of district Ludhiana.”

Deputy Commissioner Ludhiana Varinder Kumar Sharma said that on the evening of February 7, 2022, supporters of Simarjit Singh Bains and Kamaljit Singh Karwal had clashed in Atam Nagar area. after which strict legal action against them was initiated and an FIR was registered.

Varinder Kumar Sharma said, “24-hour video surveillance team has been deputed with both of them and it would move with these candidates at all times so that such incident doesn’t occur again.”

Further, Deputy Commissioner assured the residents that no person would be allowed to take law into their own hands.

Commissioner of Police Ludhiana Gurpreet Singh Bhullar informed that an FIR was registered instantly in the recent clash between supporters of Simarjit Singh Bains and Kamaljit Singh Karwal. He said, “After the incident, Joint Commissioner of Police (Rural) Ravcharan Singh Brar immediately rushed to the spot. During the preliminary investigation, it was found that there was a dereliction of duty by area SHO. He was immediately suspended from the duty.”

He said that a direct message was given that if anyone takes law into their own hands, Ludhiana Police would not hesitate to register FIR against all such persons.

Further, he informed that MLA Balwinder Singh Bains had visited his office yesterday and had claimed that some persons mentioned in this FIR were not present on the spot.

Further, Gurpreet Singh Bhullar informed that MLA Simarjit Singh Bains was questioned in detail for 9 hours yesterday. He said that he would again be summoned for questioning on the basis of visual, material or eye witness evidence as the investigation progresses.

“The case has not ended yet”

Commissioner Police Ludhiana Gurpreet Singh Bhullar assured that people should not think that the case has ended. However, it was the start of the investigation. “A team headed by Ravcharan Singh Brar is investigating the case in detail. All persons behind this incident would not be spared,” CP said.

Gurpreet Singh Bhullar informed that 8 assembly constituencies of the district fall under Police Commissionerate Ludhiana. He assured that the Ludhiana police is fully geared up for maintaining law and order during the elections.

He said that 43 companies of paramilitary force along with companies from PAP and commando battalions have been deployed in the areas under Police Commissionerate Ludhiana.

He said that quick reaction teams of the paramilitary force have also been deployed in each constituency.

Further, Police Commissioner informed that the Ludhiana Police is also constantly in touch with DRI, NCB and Excise Department regarding checks on the flow of drugs and contrabands.

CP informed that a few days ago, 95,000 litres of illicit liquor has been recovered and destroyed by CIA team from the banks of Sutlej river in Ladhowal area.