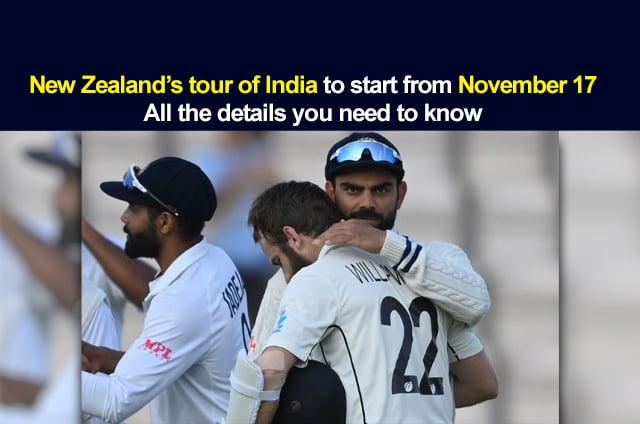 After ending as the first runner-up in the T20 World Cup, the New Zealand team is on the tour to India. The Black Caps will play 3 T20Is and 2 test matches against India. The T20 series will start on November 17 and the first match would be played in Jaipur.

New Zealand is on a tour to India and they will play two test matches. The first test match would be played in Kanpur, which will start on November 25. The two-match series will end in Mumbai and the match will start on December 3.

The arch-rivals have announced their teams for both the T20 and Test series. This would be the first T20 series after Virat Kohli’s decision of leaving the captaincy of the T20 squad. Rohit Sharma will lead the team and KL Rahul will be the vice-captain of the squad. Also, this would be Rahul Dravid’s first series as the head coach of the team.

Jasprit Bumrah and Mohammad Shami have been given rest for the tour. Ravindra Jadeja and Virat Kohli will also miss the T20 tour. On the other hand, Rohit Sharma will miss the Test series.

India team for the T20 series

This would be the first test series between India and New Zealand after the World Test Championship finals. Ajinkya Rahane will lead the team for the first test match. However, for the second test, Virat Kohli will get back his mantle. Other than Rohit Sharma, the rising star of Indian test cricket, Rishabh Pant is also given rest for the test series. Also, Hanuma Vihari and Shardul Thakur have not been given chance for the test series.

India team for the Test series