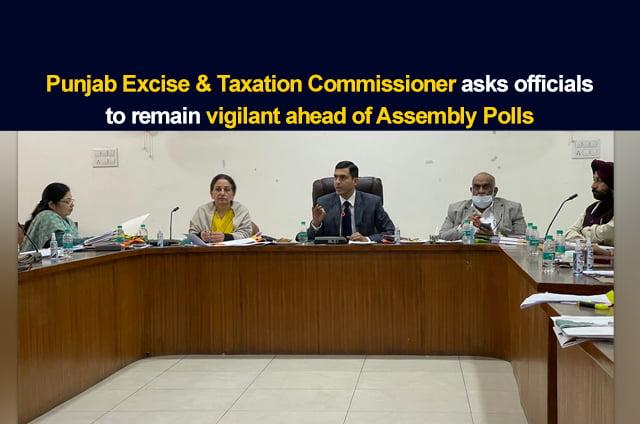 Excise & Taxation Commissioner Punjab Rajat Agrawal on Friday asked the officials to remain vigilant in view of upcoming the upcoming Assembly Polls in the state. He said this while holding a meeting with officials of his department as well as the liquor contractors at Circuit House Ludhiana.

During the meeting, the Excise & Taxation Commissioner Punjab also reviewed the status of cases related to illicit liquor, smuggled liquor, illegal bottling plants, etc and directed the officers to ensure that all cases are taken to their logical conclusion.

He directed the officials that if the smugglers and other violators are not arrested on time, they should initiate proceedings to declare them Proclaimed Offenders (POs). He also directed them to hold regular review meetings with senior Civil and Police department officials.

He said that in view of the upcoming Punjab Vidhan Sabha elections, the department officials should check the premises of all hotels, godowns, restaurants, etc so that illicit liquor is not stored there. He also directed them that the liquor prices should be checked and that there is no overcharging.

He said that as the Punjab Vidhan Sabha elections are approaching, the Excise department officials should also hold meetings with officers from other enforcement agencies so that there is a complete check on the smuggling or storage of illicit liquor. He also said that all officers should adopt a zero-tolerance policy and any leniency on any part would not be tolerated. He also directed that senior department officials should lead all the raids.