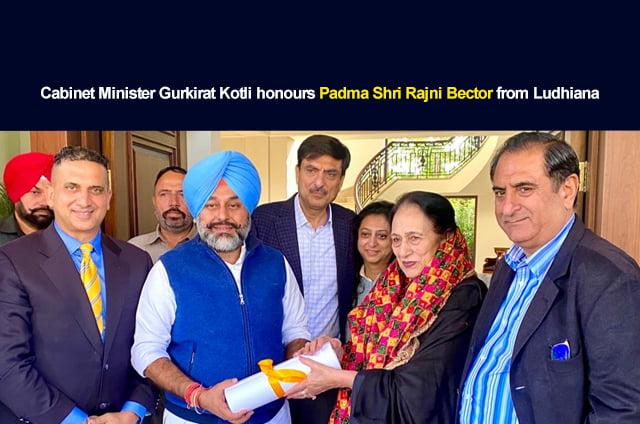 One of the eminent businesswomen from Ludhiana, Padma Shri Rajni Bector was conferred with a “Certificate of Honour” by the Government of Punjab on Saturday, December 4.

Industries and Commerce Minister Government of Punjab, Gurkirat Singh Kotli, along with Chairman Punjab Infotech Harpreet Sandhu handed over the certificate of honour to Rajni Bector at here residence in Ludhiana.

Gurkirat Singh also presented a Phulkari to Rajni Bector which is a symbol of the rich cultural heritage of Punjab. Felicitating Rajni Bector, the minister said that she has not only brought laurels to the state of Punjab but her tireless efforts to take the industry in the state to the next level have and always will be appreciated.

“You are a role model for every young entrepreneur and we wish that you should carry on working towards the larger goals,” said Gurkirat Kotli.

Rajni Bector was recently conferred with the Padma Shri award by the President of India for her efforts towards the promotion and sustainable growth of Trade, Industry & Women Empowerment.

Expressing her gratitude to Gurkirat Singh, Rajni Bector said that she has always worked with a positive approach that has helped her attain success in all her endeavours. “I always wish that Industry in Punjab should grow and achieve new milestones thus becoming the pride of the nation,” Bector said.