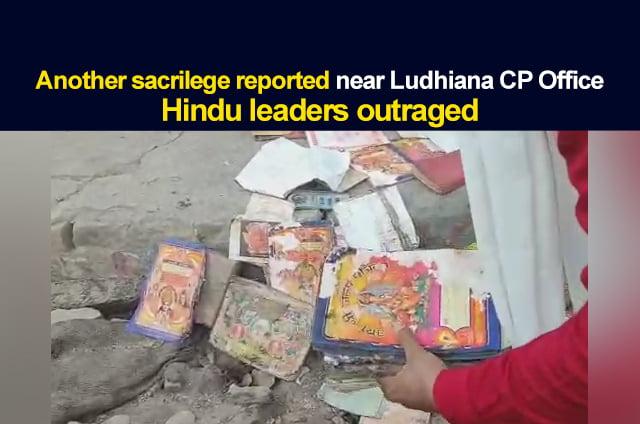 Within a week, several sacrilege cases have been reported in Punjab. Now, on Tuesday, December 21, torn pages of Bhagvat Geeta were found near Ludhiana Police Commissioner office.

Along with Bhagwat Geeta, pages of different holy books were also found falling near the Ludhiana CP office. Because of the incidents, the Hindu leaders were fumed.

As soon as the information was received, ACP Harish Behl reached the spot. Several Hindu leaders were expressing their anger over the incident. The ACP assured them of taking strict action and finding the accused soon.

Outside the Police Commissioner Office in Ludhiana, several Hindu holy books and pictures were found in a bad condition. Receiving the information, Shivsena Punjab Chairman Rajeev Tandon reached the spot. He immediately informed the police about it.

He said, “Except Hindu temples, police security has been increased at all the religious places amid the increasing cases of sacrilege in Punjab. Other than that, it is shocking that sacrilege has been witnessed outside Police Commissioner’s Office.”

Further, he said that Hindus are already being sidelined in the state.

ACP Civil Lines Harish Behl said that the investigation in the case is underway and the CCTV footage will be checked. It is to be noted that similar sacrilege cases have been witnessed in Golden Temple, Amritsar and a Gurudwara in Kapurthala in the last week. Recently, at the Singhu Border also, a man accused of attempting sacrilege of Sikh’s holy book was killed by the Nihangs.