Amit Shah claims,“Ludhiana bicycles will shine around the world if BJP comes to power in Punjab” 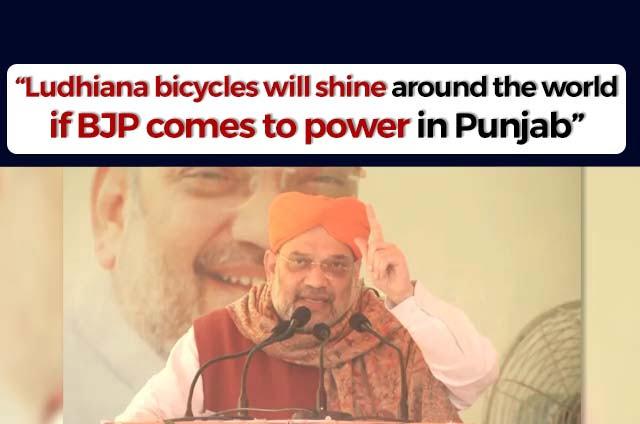 While addressing the rally in Ludhiana today, Union Home Minister Amit Shah said that Ludhiana’s bicycles will shine all around the world if Bhartiya Janta Party is voted to power in Punjab.

He appealed to the people to elect NDA and said that it will ensure that Ludhiana bicycles are available around the world.

“Punjab and the Sikhs have a special place in India. Punjab is the heart of India and without Punjab, India cannot be imagined,” Amit Shah said.

Shah recalled the contribution of Punjab in providing security to the nation. He said, from Mughals to the British, the Punjabis had always defended the country against the enemies. Even now, he added, after independence, Punjabis continue to defend the nation. “Greatest number of sacrifices is by the Punjabi soldiers only,” he said.

Shah pointed out, it was Narendra Modi who punished the culprits of the 1984anti-Sikh riots.

Listing out the mission for Punjab, Amit Shah promised a drug-free, mafia-free and peaceful Punjab. Amit Shah said that Narcotics Control Bureau branches will be made in four districts of Punjab and task forces will be formed in each state.

End of conversions if we come to power in Punjab

Amit Shah also promised to finish the practice of conversions in Punjab once the BJP led NDA government is formed in the state.

He said, Punjab was having the problem of religious conversions and it was beyond the capacity of CM Channi to stop these.

Farmers’ income will be increased

Home Minister Amit Shah said the NDA government will ensure soil health, encourage crop diversification and change of cropping patterns. He said, Punjabi farmers have fed the nation all these years and they deserve to be incentivised and their incomes will be increased.

ALSO READ: “If you can’t keep your PM safe, how will you safeguard Punjab?” Amit Shah questions Channi