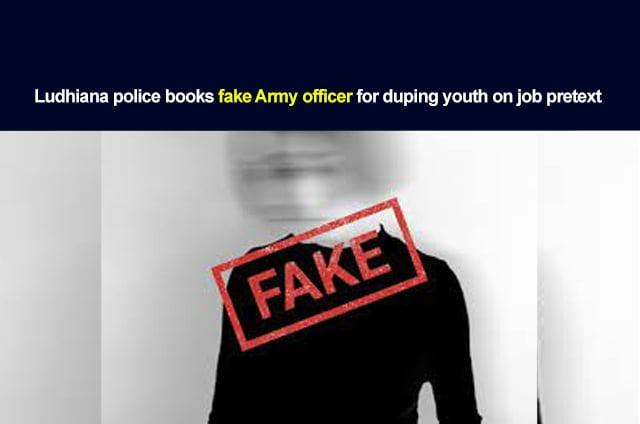 Ludhiana police on Saturday, October 23 books a fake army officer for duping youth on the pretext of getting them jobs in the armed forces. According to the reports, the accused has been identified as Sarwan Singh alias Colonel Pradeep Singh, a resident of Nurpur Bet.

He reportedly duped 27 youngsters of Rs. 23.70 lakhs. Most of them belonged to Ludhiana and some were from Sangrur. The complainant, Charan Singh of Phallewal said, “I had met Sarwan Singh as he visited my acquaintance to get his driving license made. He introduced himself as an Army officer and said that he help youngsters get jobs in the Indian Army. For that, he charges a small fee. Also, he had demanded 3.5 lakh from me to help me get a job.”

After giving them fake Army uniforms, Sarwan Singh reportedly asked him and other youngsters to come to Halwara Airforce Station. The accused told them that they would be taken to an Army base camp from there in a bus.

Charan Singh reportedly said, “When they reached the station, none was there. The accused’s cellphones were switched off. We realized that we were cheated.”

Jodhan police station SHO inspector Hira Singh said that the accused was yet to be arrested. The police further informed that he used two names, Sarwan Singh and Pardeep Singh. Also, he used his brother’s documents to get a job in the Army. His brother has also filed a complaint against him.

A case has been reportedly registered against the accused under section 420 and 406 of the IPC.