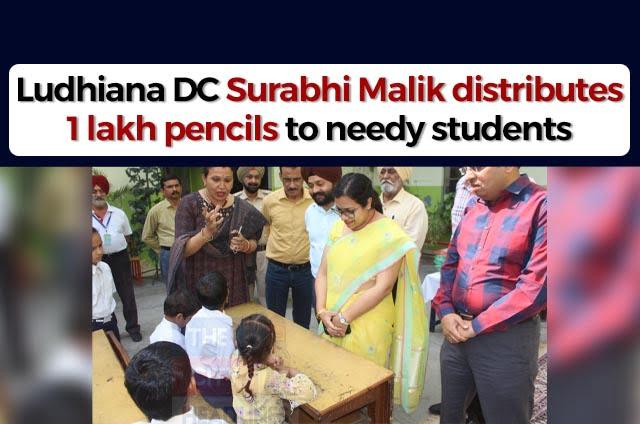 Under the “Meri Kalam Meri Taqat” initiative of District Administration Ludhiana, around 1 lakh pencils were distributed to the needy children in various orphanages, slums etc.

After Deputy Commissioner Surabhi Malik launched this project from Red Cross Bal Bhawan, Sarabha Nagar, Ludhiana, the district administration officials visited various orphanages and slums where these pencils were distributed to the needy.

On this occasion, she also interacted with the students of this institute and urged them to work hard to achieve new heights in life. She also motivated them for remaining positive despite all hardships.

Dr Harjinder Singh Bedi said that soon, more such initiatives would be launched by the District Administration Ludhiana. He also appealed to all Ludhiana residents to come forward and donate wholeheartedly for such social causes.

It is pertinent to mention that on April 26, under the slogan, “Waste Wealth-Give & Take”, District Administration Ludhiana launched a unique initiative under which a “Donation Corner” was set up outside the entry of DC office, here.

In this donation corner, residents can donate stationary items and toys for needy children, which would be distributed further.

This “Donation Corner” comprises of a “Stationary ATM” and “Toys Bank”. The “Stationary ATM” would cater to the needs of slum children, those in rehabilitation Centre and needy children. Residents can donate new/old stationary items such as Pencils, sharpeners, erasers, pens, colours, Notebooks, registers, blank papers, Children books etc.

The “Stationary ATM” will help the District Administration to donate used items in households and offices. All items will be collected and cleaned by Hunar Hut Ludhiana and would further be donated to children of slum area, orphanages, poor children studying in government schools etc.

The “Toys Bank” offers the facility for residents to donate toys of their children or grandchildren so that after repair by Hunar Hut, they can be further donated to Aanganwaris, Slum children, kids in orphanages and to other needy children. Needy Parents, caretakers etc can also take away these toys items whenever they require, but parents should be accompanied by their children.