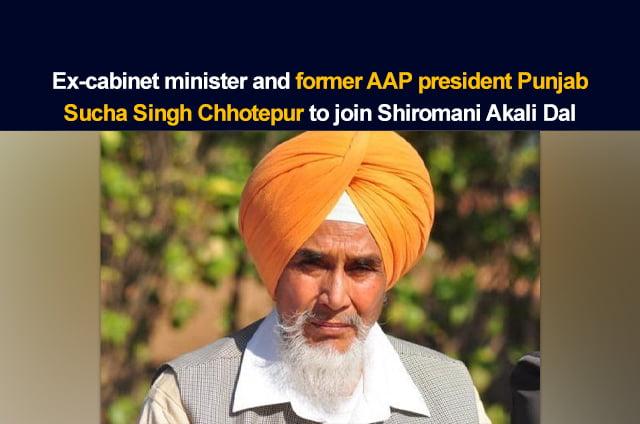 Also, Chhotepur is likely to fight in the upcoming Assembly Elections from the Batala constituency. It is to be noted that Shiromani Akali Dal has not announced their candidate from the Batala seat yet. The sitting MLA Lakhbir Singh Lodhinangal has also been shifted to the Fatehgarh Churian seat.

In the year 2014, Arvind Kejriwal appointed Sucha Singh Chhotepur as the state convener of the Aam Aadmi Party. However, after the corruption charges in the year 2016, he was removed from his post.

Just before the 2017 Assembly Polls, he started his own political party called Apna Punjab Party.

He was the cabinet minister during the Surjit Singh Barnala-led Shiromani Akali Dal government. Protesting against the Punjab Police, he resigned from the government along with Captain Amarinder Singh in the year 1986.

Sucha Singh has fought the state Assembly elections five times out of which he has won twice. The first win came in the year 1985 as he fought for the Dhariwal seat with Shiromani Akali Dal’s ticket. In the year 2002, he independently fought the elections in Dhariwal and defeated Sucha Singh Langah of SAD.

Also read: Guarantees for SC community: AAP will pay fee of those willing to study abroad