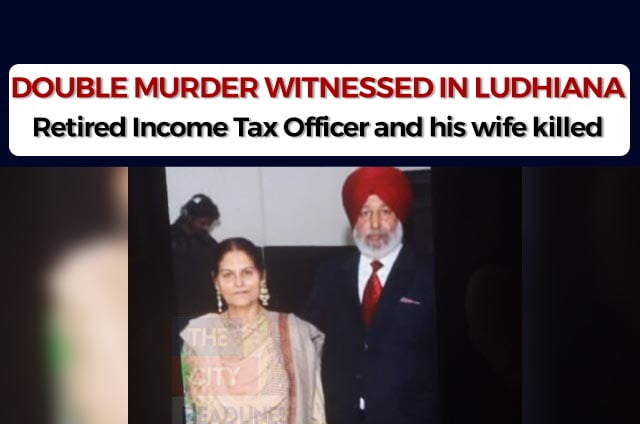 A double murder was witnessed in Ludhiana’s BRS Nagar area late in the evening on Wednesday, May 4. In a cold-blooded murder, a retired Income Tax Officer and his wife were killed.

They have been identified as Sukhdev Singh Lote (66), a retired income Tax Officer and Gurmeet Kaur 64.

The incident came to light when one of their neigbours, Pawan Deora, was out for a walk with his dog and saw a man scaling the wall of the Lote’s house to escape. That is when he hurled and informed the people in the locality. When they entered the house, they found the Sukhdev and Gurmeet’s body mutilated and chopped.

Senior police officers including Police Commissioner Kaustubh Sharma reached the crime spot after getting the information. The police teams are trying to gather more information about the incidence through the CCTV footage.

It is to be noted that the couple’s fingers were also found slit and no jewellery was stolen. Further investigation into the case is underway.

Two of the sons of the couple are settled abroad. As per the reports, Sukhdev had to go to one of his sons in Scotland on May 15. This cold-blooded murder has created a panic amongst the people in the locality.