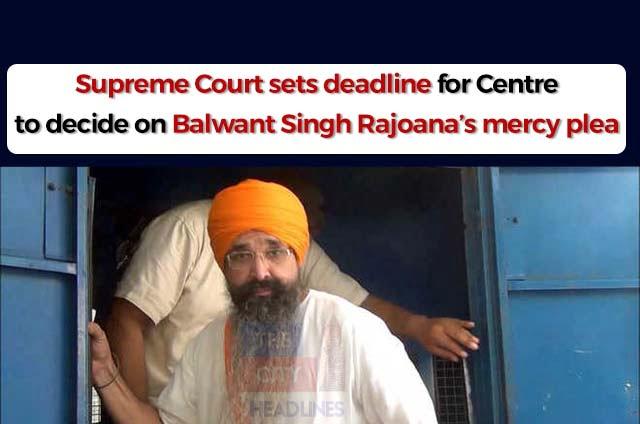 The Supreme Court of India has directed the Central government to take a decision on granting pardon to Balwant Singh Rajoana. He was awarded death sentence for the assassination of then Punjab Chief Minister Beant Singh in 1995.

A bench of Justices UU Lalit, S Ravindra Bhat, and PS Narasimha directed Union Home Secretary and Director (Prosecution) CBI to remain present in Court on May 2, the next date of hearing, in case the Centre fails to make a decision.

According to the reports, the apex court was irked over the Centre not taking any clear stand in Rajoana’s case.

“We direct that the matter shall immediately be looked into by the concerned authorities including the Government of India and the Central Bureau of Investigation (CBI),” the Supreme Court said.

The order came on a petition filed by Rajoana, who moved the top court two years ago seeking implementation of a decision taken by the Union Ministry of Home Affairs (MHA) in September 2019 to commute Rajoana’s death sentence to life.

Balwant Singh Rajoana, was sentenced to death for the murder of former Punjab chief minister Beant Singh. He died in a bomb explosion in Chandigarh on August 31, 1995.

In September 2019, the Centre government decided to commute the death penalty of Rajoana to a life sentence on the special occasion of the 550th birth anniversary of Guru Nanak Dev. However, more than two years have passed but the decision is yet to be implemented.

He had approached the apex court seeking commutation of sentence to life imprisonment for the failure on part of the Central government to decide on his mercy petition filed eight years ago.