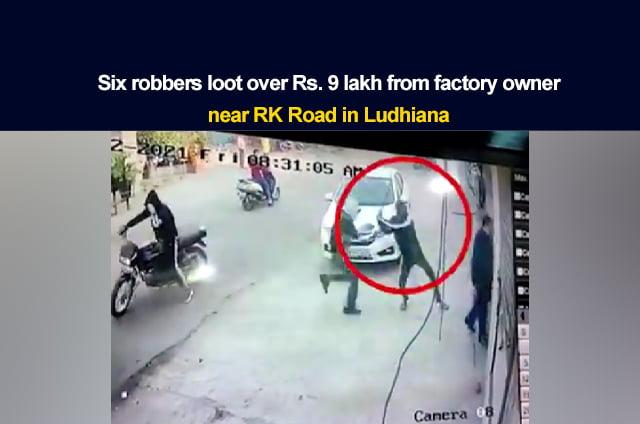 As many as six robbers on Friday morning looted more than Rs. 9 lakh from a hosiery owner on RK Road Ludhiana. The robbers hit the owner of the Shiva factory with a rod and took away the bag containing Rs. 9.5 lakh.

The incident was captured on the CCTV camera. It is to be noted that the driver of the victim did not come out to help him during the robbery. When they fled from the spot, he came out to help the victim.

The victim Radhe Mohan Thapar is the owner of Shiva Hosiery on RK Road. He had to give salary to the workers at his factory today. Therefore, he carried the money in a bag and went to the factory with his driver.

He stepped down from the car and was going towards the factory when three bike-borne robbers hit him with a rod and fled the spot with the money.

Radhe Mohan’s driver was getting the food and other bags from the car when the incident happened.

ADCP 4 Rupinder Kaur Saran said that the robbers were on two motorcycles. Further investigation into the case is underway.