No sacrilege in Kapurthala, Gurudwara Granthi arrested for ‘murder’ 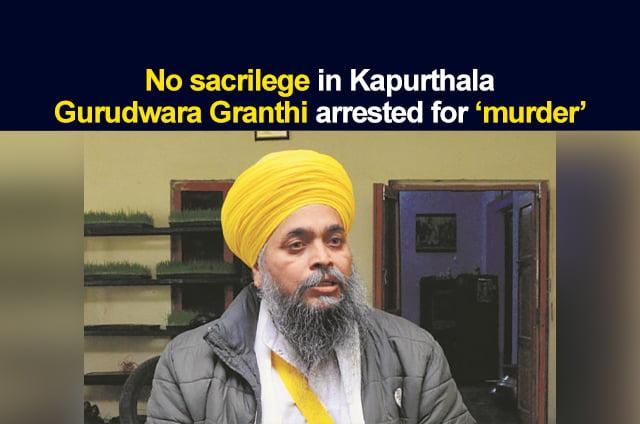 A sacrilege case was reported at a Gurudwara in Nizampur village of Kapurthala district on December 19. The accused youth was beaten to death. Six days after the incident, the police has arrested Gurudwara Granthi Amarjit Singh on the charge of murder.

According to the reports, the police have booked 100 unidentified people in the same case and also claimed to recover a pistol used in the firing incident that day.

The police reportedly ruled out the desecration and called it a murder. They also said that it was a conspiracy to “sensationalise” the sacrilege issue.

It is to be noted that Chief Minister Charanjit Singh Channi in a statement had said that the investigations into the Kapurthala incident had found that there was no evidence of sacrilege.

Addressing the media on Friday, Chief Minister Channi said, “The youth was lynched. The investigation is pointing towards murder.”

The arrested Granthi Amarjit Singh had filed an FIR in the Kapurthala incident on the charges of hurting religious sentiments. However, now the police have added several charges under sections 302 and 307 of the IPC  as well as the Arms Act.