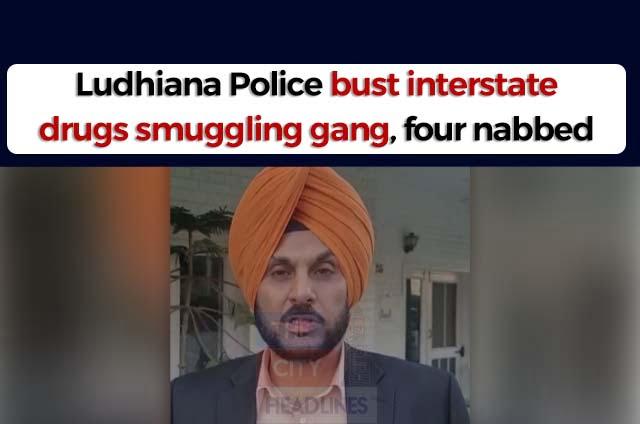 Ludhiana Commissionerate Police have busted an inter-state drug peddling gang involved in the supply of Ganja, opium and poppy husk into Punjab.

The police have arrested four members of this gang along with the recovery of 2.04 quintals of Ganja, 3 KG Poppy Husk, and 500 Grams of opium, which was being pumped into Punjab from Odisha.

He said that on the search of the truck in presence of ACP Detective Harbinder Singh, the Police recovered 2.04 quintals of Ganja, 3 kg poppy husk and 500 grams of opium.

The CP said that during the investigation the accused revealed that he had been carrying out this smuggling network in the garb of the transportation business.

They delivered medicines and tyres to Bhubaneswar, Odisha; from there, they loaded raw iron material in their truck for delivery into Mandi Gobindgarh, the CP said adding that meanwhile, the accused received this drug hailed for supplying in Ludhiana and surrounding areas.

He further mentioned that the accused were to get Rs. 1.20 lakh in lieu of delivering drugs at Ludhiana.

Bhullar said that the accused were in the transport business for decades and had been carrying out this illegal activity in the garb of their business.

He said that a case under the NDPS act has been registered against the accused besides reiterating that the severest of severe action will be ensured against persons involved in the heinous trade of drugs.

He also said that the Police remand of these accused would be taken from the court so as to trace the forward and backward linkages of this gang so that this supply chain could be broken at the earliest.