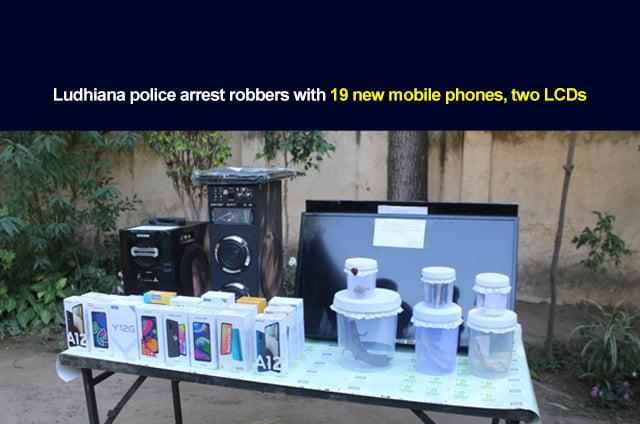 The Ludhiana Commissionerate Police on Tuesday resolved a high-profile loot case held at Focal point area last month by busting a gang of robbers and arresting the three accused.

Divulging the details, the Commissioner of Police Ludhiana Gurpreet Singh Bhullar said that a loot had taken place at a shop of money exchange in the Focal point area on November 15. He said that the robbers had snatched Rs 5.80 lakh from Amrita Nanda and Bartika after the mother-daughter duo were heading home after closing the shop. Bhullar said that the robbers while committing the crime had injured the mother with a gunshot whereas the daughter had also sustained the sharp injury.

The Commissioner of Police said that the country-made pistol used for the crime was purchased by Bobby from Uttar Pradesh at Rs. 10,000. The police have now recovered the weapon, along with two motorcycles, one of which was stolen and the other was snatched, five live cartridges and Rs 1.05 lakh cash, a laptop, a bag and three ATM cards. Several cases have been already registered against these criminals.

Bhullar said that further investigation into the case is going on adding that based on it, the Police have also lodged FIR against Ashok Masih, a resident of Model Town Ludhiana and Ashok Kumar of Giaspura area, who used to purchase stolen goods from this gang. He said that 19 new mobile phones, two LCDs and two Home theatres have been recovered from them.

The CP said that the police remand of these accused have been taken from the court to further investigate the case in detail besides the whereabouts of the other accused.

Also read: AAP will pay fee of those willing to study abroad