Ludhiana: Man drives away with SUV from famous showroom on pretext of test drive 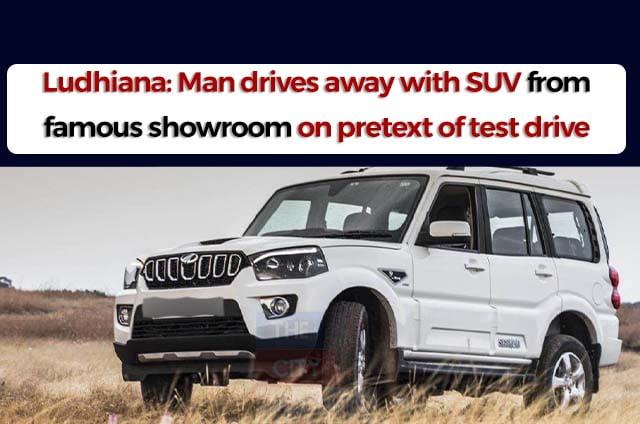 A horrifying incident has been witnessed in Ludhiana’s Sahnewal where a man possessed as a customer in a famous four-wheeler showroom and drove away an SUV on the pretext of getting a test ride.

As per the reports, the incident happened on Saturday evening. The sales head of the auto agency in Ludhiana, Sunita Rani, reportedly said that a man came to the showroom saying that he wanted to buy an SUV. He saw some cars at the showroom and then wished to take a test drive of Mahindra Scorpio demo car.

Further, she informed, “As per the rules, I kept the driving license of the man and went with him for test ride. We reached near Rajgarh Estate when he stopped the car and asked me to click his picture inside the SUV. When I took my phone out of the pocket, he snatched it and took out a gun.”

“He also snatched his driving license and threatened me to keep quiet. He made me get out of the car and drove it away,” Sunita Rani further said.

SHO Sahnewal, Sub-inspector Sewa Singh reportedly said that the man had been caught in the CCTV cameras. He was wearing blue jeans, a black t-shirt and a white cap. He had covered his face with a mask. Under section 379-B (snatching) of the IPC, an FIR has been registered.