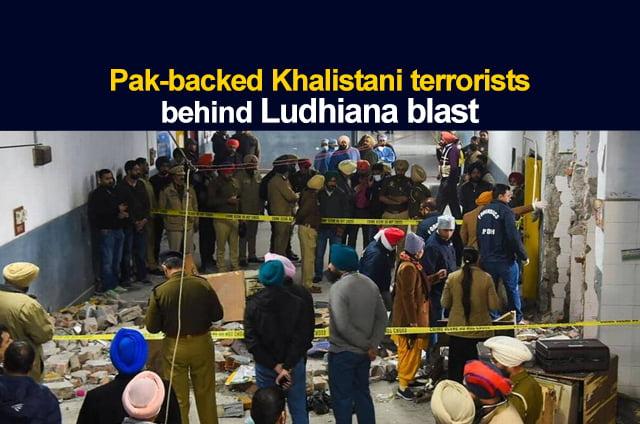 The intelligence agencies have got some worrying inputs related to the Ludhiana Court Complex bomb blast. They have got inputs regarding the involvement of a Khalistan-supported group backed by Pakistan’s ISI for the planning and the execution of the bomb blast.

As per the reports, a senior intelligence officer has said that after the Red Fort incident, intelligence agencies were on their toes in Punjab. They were continuously keeping a close watch on Khalistan forces.

The handlers based in Pakistan were giving instructions to their on-ground workers to execute terror activities in Punjab. Further, the official revealed that many of such attempts were foiled in a joint operation with Punjab police.

A senior police officer said, “We got specific inputs regarding local gangs being hired and radicalized to revive the Khalistan movement in the state that was backed by Pakistan’s ISI. We shared these inputs with the local police. After that, the operation to conducted across the state to prepare a list of criminals out on bail or absconding. The recoveries made in the last few months were just tip of an iceberg,” said a senior police officer.

He added that the incident of grenade blast near the gate of the Army cantonment in Pathankot in November was also a terror activity executed by local criminals.

A senior officer reportedly informed that this year, around 42 drone sightings of unmanned aerial vehicles near Punjab were reported. Also, many remained unreported.

“The explosives and small arms were dropped using the drone from Pakistan side will be used to destabilize peace in the state,” the official revealed.

In August this year, Punjab Police had arrested Gurmukh Singh, son of the nephew of Jarnail Singh Bhindranwale. A huge amount of explosives were also recovered from his possession.

Later, in the investigation, it was found that he was getting logistic support from Pakistan’s ISI and by other Pakistan-based pro-Khalistan terrorist groups to revive militancy before state elections.