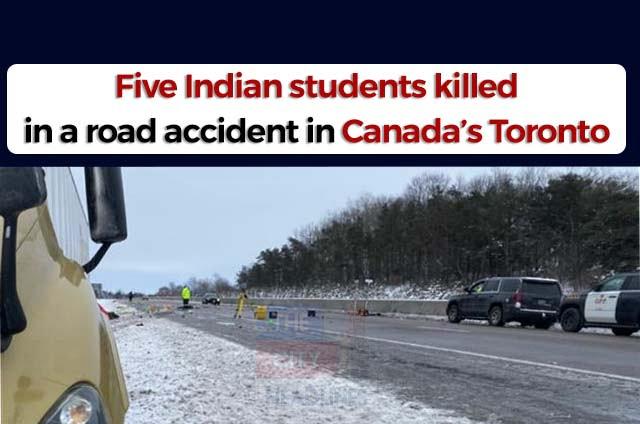 As many as five Indian students were killed in a road accident in Canada’s Toronto, the Ministry of External Affairs reportedly said today.

According to the reports, in a fatal collision between a van and a trailer truck, five Indian students lost their lives. The accident took place on Highway 401 in Quinte West on Saturday.

The local police have identified the officials as Jaspinder Singh, Harpreet Singh, Karanpal Singh, Mohit Chouhan, and Pawan Kumar. The reports also suggest that two others were severely injured and they are hospitalised.

The deceased and the victims were reportedly of the age 21 to 24. The local police said that all of them were students of the Greater Toronto and Montreal areas. They were in the passenger van when it collided with a tractor-trailer at around 3:45 am. The investigation into the matter is underway.

Minister of External Affairs, S Jaikshankar took to Twitter to mourn the death of the deceased Indian students.

He wrote, “Deeply mourn the passing away of 5 Indian students in Canada. Condolences to their families. Pray for the recovery of those injured.”

ALSO READ: Ludhiana: Man drives away with SUV from famous showroom on pretext of test drive