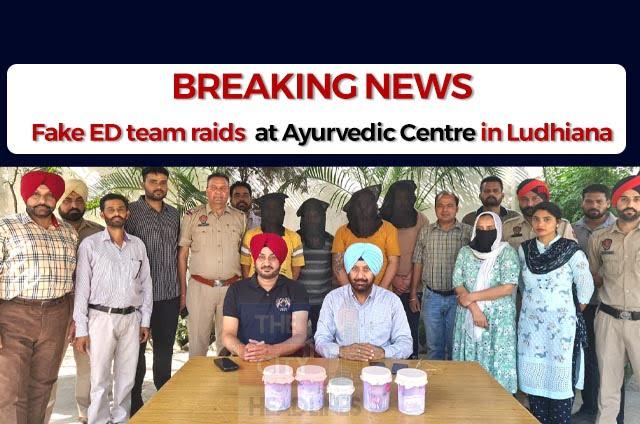 The Commissioner Police on Friday busted a robbery at Ayurveda Yogya Pharmacy, Sahnewal and arrested five accused including a woman. The police said that the arrested woman was an ex-employee at the centre.

Two cars, fake ID cards of the Enforcement Directorate and Rs 55000 cash has been seized by Ludhiana Police. The accused persons have been identified as kingpin Amanpreet Kaur (35) of Rampur village, who was an ex-employee at Ayurveda Yogya Pharmacy, her well-known Kulwinder Singh (44), of Aman Nagar, Amandeep Singh (38) of Kolon village, Malerkotla, Gurdeep Singh (28) of Jodhpur, Barnala and Davinder Singh (38) of Ashok Nagar, Ludhiana.

Four accused including a dismissed cop Navjot Singh of Balala village, Samrala is absconding and would be arrested soon.

Disclosing further details, former CP Gurpreet Singh Bhullar said a FIR under Sections 420 (cheating) and 380 (theft in dwelling house) of the Indian Penal Code was lodged against the unidentified accused on the statement of Harbhajan Singh Yogacharya. In his statement, he said that a gang of miscreants posing as ED officials had carried out a raid at his centre and decamped with ₹7 lakh on March 11, 2022.

Harbhajan further complained that unidentified men including a man wearing police uniform knocked on the door and introduced themselves as officials of the ED. The accused claimed that he had hidden unaccounted money in the centre and they wanted to investigate. While leaving, the accused took away cash from the centre and digital video recorder, he added.

CP said that following the incident, a team of CIA staff-1 along with local police rushed to the spot and started the investigation into the robbery. After a thorough investigation, the police team arrested five of the accused.

Bhullar said that accused Amanpreet Kaur had hatched a conspiracy with Kulwinder Singh to loot the cash from the Ayurveda centre. He told that Harbhajan Singh Yogacharaya had shunted out her sometimes ago from the centre.

Commissioner of Police said that Kulwinder Singh, Amandeep Singh had been facing four criminal cases and meanwhile Davinder Singh was facing a road mishap incident. He told that police would produce five of them in the courts and would seek further remand to quiz them further in the case and to know the whereabouts of the remaining accused.

ALSO READ: New Police Commissioner appointed in Ludhiana | Know who he is