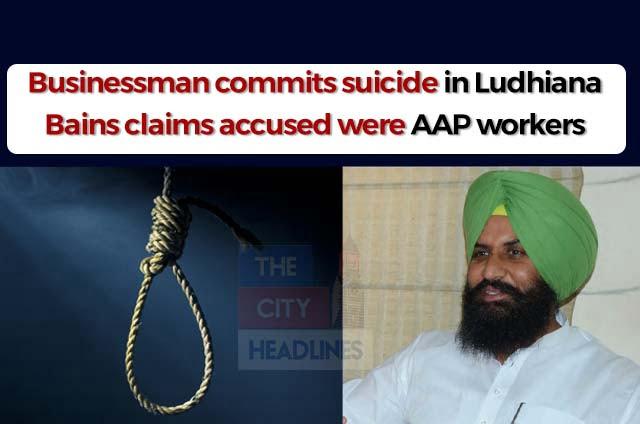 A businessman in Ludhiana allegedly committed suicide as he was upset with five Aam Aadmi Party workers. The incident happened on Thursday morning when the family members of the deceased tried to open the door of his room and found him hanging from the ceiling fan.

The deceased has been identified as Jaswinder Singh Dhami (68) a resident of the Gill Road area in Ludhiana. The police found a suicide note during the investigation. He had written the names of wrote that the accused. He said that one of the accused is his tenant who was continuously harassing him.

The police have registered a case of abetment to suicide against Harpreet Singh, Paramvir Singh, Gurmeet Singh, Rakesh and Armi Baweja on the complaint of Gurminder Singh, resident of Canal Avenue, Pakhowal Road.

SHO Inspector Rohit Sharma of Police Division 6 said that Jaswinder Singh Dhami has a house near his shops. He had given the shops for rent to the accused. In the suicide note, Jaswinder Singh wrote that the accused were continuously harassing him.

Lok Insaaf Party chief and former MLA Simarjit Singh Bains reached the crime spot as soon as he got the information about the suicide. He accused that the accused were Aam Aadmi Party workers.

Further, he said that the last rites would not be performed until the accused were arrested. The investigating officer Rohit said that the accused are still and search operations are being conducted to find them.