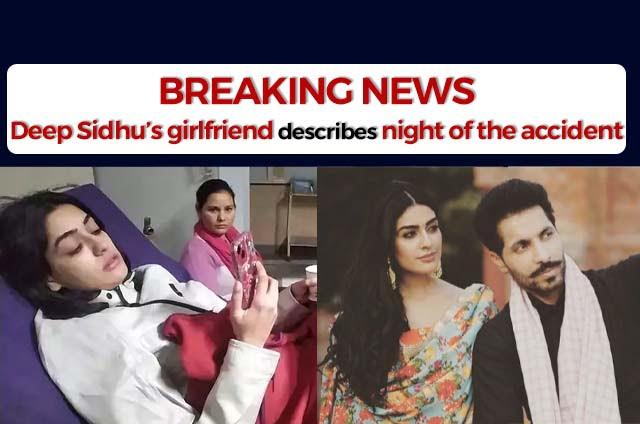 Actor turned social activist Deep Sidhu on February 15 died in a road accident on Kundli-Manesar-Palwal Expressway. He was driving his White Scorpio when the accident took place.

Deep Sidhu’s co-passenger was one of his female friends Reena Rai. She claims to be Deep Sidhu’s girlfriend. A day after Deep Sidhu’s bhog and Antim Ardaas, Reena Rai took to Instagram and thoroughly explained her relationship with Deep Sidhu and the accident because of which Deep lost his life.

In a long Instagram post, Reena Rai explained her version of the accident and why were she and Deep were heading to Punjab.

In her post, Reena Rai wrote that she flew from the United States to India to celebrate Valentine’s Day with Deep Sidhu. According to Reena, she and Deep fell in love in the year 2018, during the shoots of the movie Rang Punjab. Deep even attended Reena’s sister’s marriage in San Fransisco.

They even used to visit Deep’s brother’s place in Ludhiana.

Describing her version of the accident, Reena Roy wrote, “Last Sunday, I flew into Delhi to begin a few projects and celebrate Valentine’s Day with Deep since we missed celebrating it last year.” Further, she wrote, “The next day we decided to head out of Punjab before heading home to Mumbai. We packed up our luggage, loaded the Scorpio, and headed out. Deep and I chatted for sometime and then I decided to take a nap as I was still jet lagged. I reclined my seat, took off my shoes, and fell asleep.”

Further describing the incident, Reena wrote, “All I remember next is being thrown violently from the seat, hitting the airbag, and landing in the foot rest. I looked up and saw Deep not moving.”

“I kept yelling “Deep, Wake Up!”, she said. Reena informed that the right side of Reena’s face was covered in blood.

“I felt faint, leaned back and started yelling for help. A bystander came and pulled me out of the Scorpio and laid me on the ground.”

Further Reena explained, “While lying there, I had someone call Mandeep (Deep’s brother) and begged whoever was around to help Deep.”

She also informed that the bystanders were “frantically” trying to free Deep from the Scorpio as the car cabin was crushed around him.

According to Reena, she was put in an ambulance for 30 minutes. “The paramedics rushed Deep into the second ambulance and we were both transported to the hospital.”

Reena further said that her family did not tell her about Deep’s death until a family member was next to her.

Deep Sidhu’s co-passenger, who claims to be his girlfriend, has thoroughly explained the incident. In the caption of the post, Reena even wrote, “My beloved Deep, ow that your Bhog has touched the world and your soul is at rest, I’m letting the world into a tiny piece of our life.

Reena even thanked the supporters and the Sangat who showed up at his Bhog ceremony in Fatehgarh Sahib on February 24. Around 3-4 lakh people had reached Fatehgarh Sahib to pay obeisance to Deep Sidhu.