CM Channi scraps 40,000 cases of VAT against industrialists and traders 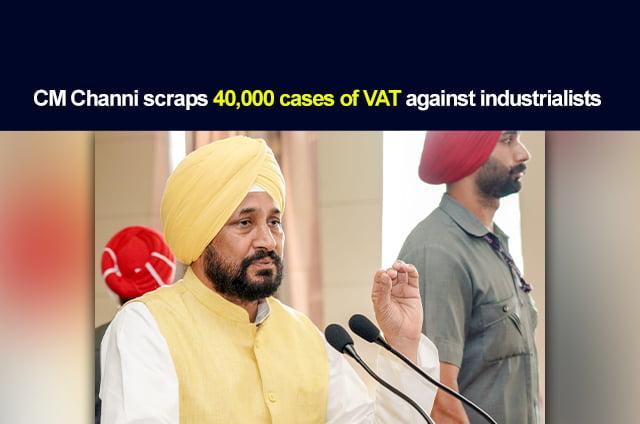 Punjab CM Charanjit Singh Channi on Wednesday announced the scrapping of 40,000 pending cases of VAT, out of the total of 48,000 cases related to the financial years 2014 to 2017, against traders and industrialists across the state.

Addressing the audience on the 2nd day of the 4th Progressive Punjab Investors Summit in Ludhiana, CM said that the 8,000 remaining cases will be settled amicably. The concerned traders and industrialists would be asked to deposit 30% of the total outstanding tax liability.

He also announced that they will have to deposit 20% of the aforesaid tax liability in the current fiscal and the balance 80% by the next.

CM Channi also announced to lay the foundation stone of the upcoming Green Field airport at Halwara (Ludhiana) on November 15. He said that the airport will be completed within a period of eight months.

The Chief Minister further said that to boost economic activity in the borders district of the state the Punjab government will acquire requisite land for the Patti-Makhu rail link and hand it over to the Ministry of Railways, GoI before the ensuing budget.

Chairman of Malhotra group Meenu Malhotra firmed up an investment of Rs. 1,600 crore in the real estate sector.

Vice President International Tractors AS Mittal announced to set up another Tractor factory in the state.

Also read: List of all the announcements made by CM Channi in Cabinet meeting in Ludhiana