“Brother-sister duo” would have fled to Italy had India suffered COVID-19 in Congress’ regime: Yogi Adityanath 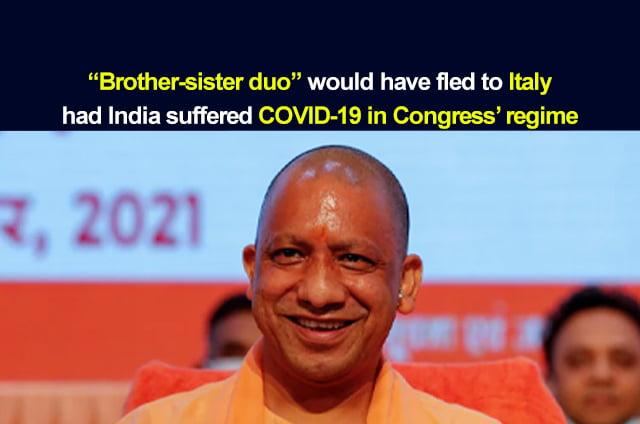 Uttar Pradesh Chief Minister Yogi Adityanath on Thursday said that if the coronavirus pandemic had occurred during the Congress’ regime, the “brother-sister duo” would have fled to Italy.

UP CM Yogi Adityanath was addressing at the Samajik Pratinidhi Sammelan. Pointing at Rahul and Priyanka Gandhi, he said, “If there had been Congress government when the coronavirus pandemic struck, then the brother and sister would have fled to Italy.”

Not only Congress, but Yogi Adityanath slammed the Samajwadi party also. He went to say that if there had been SP’s government, there would have been competition between uncle and nephew to misappropriate aid. The poor would not have been cared for.

Further Yogi said, “God knows what would have happened under “Behenji” (Mayawati).

CM Yogi Adityanath said, “On November 2, 1990, none would have dared to open fire on Ram Bhakts, had there been a BJP government. Those who ordered to open fire were ‘Ramdrohi’.”

Also read: CBSE replies to Channi for opposing decision to keep Punjabi out of major subjects