“Arrogance has succumbed to Satyagrah” | How did opposition react to PM’s decision of repealing farm laws? 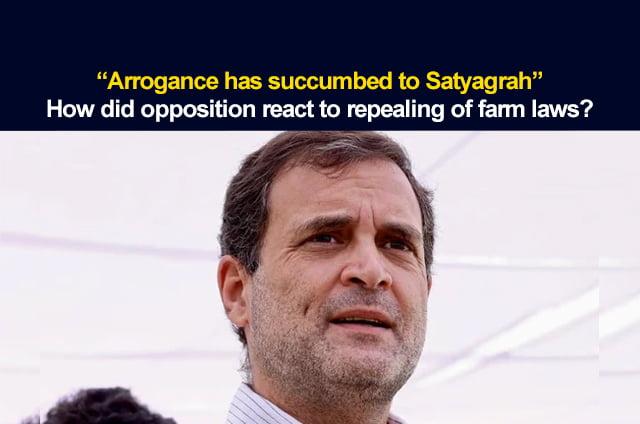 A major demand of the farmers all across the country, especially in the northern region, has been finally accepted by the Central government. Prime Minister Narendra Modi has said that the government will repeal the three farm laws against which the farmers of the country have been protesting for almost a year now.

On the occasion of the 552nd Prakash Purab of Guru Nanak Dev Ji, Prime Minister Narendra Modi has made this announcement and it is to be noted that this announcement came prior to the Assembly Polls in Punjab that will be held in February 2022.

The opposition leaders have hailed the decision and termed it as a victory of the farmers. Appreciating the efforts of the farmers, Rahul Gandhi took to Twitter and wrote that arrogance succumbed to Satyagrah of the nation’s “Annadata”. “Jai Hind, Jai Hind Ka Kisan”.

He also reshared an old video in which he was seen saying that the government would be forced to take back the farm laws.

Shiromani Akali Dal’s Parkash Singh Badal has congratulated the farmers for the decision. On the other hand, he said that the martyrdom of the farmers during the protest and also “disgraceful” incidents like that of Lakhimpur Kheri will remain a dark blot on the government’s face.

Delhi’s CM and AAP’s supremo Arvind Kejriwal also took to Twitter and hailed the farmers of the country. He wrote that more than 700 farmers died during the protest and their martyrdom will remain immortal. Further, he wrote, “The coming generations will remember how the farmers of this country put their lives on the line to save agriculture and farmers.”

PPCC Chief Navjot Singh Sidhu also wrote that the Satyagrah of the farmers gets historic success and their sacrifice has paid dividends.

Captain Amarinder Singh, who may join hands with BJP in the upcoming Assembly elections, also thanked Prime Minister Narendra Modi for the decision.

He also said that he had been pursuing the matter with the Centre government for more than one year and has met Narendra Modi and Amit Shah for the same.