All set for Ind vs Pak, “Maaro Mujhe Maaro” guy is back 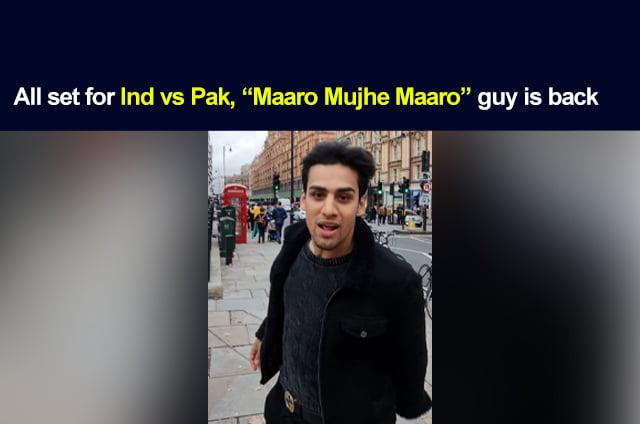 We all know that cricket is worshipped in both India and Pakistan. And the real fans wait for the ultimate battle between the two nations. Whenever there is an India vs Pakistan game, we get to see some crazy fans in the stadium. Do you remember the “Maaro Mujhe Maaro” guy who made all of us laugh after the 2019 clash of India and Pakistan in the World Cup? Yes, the guy is back with a bang now.

The fans all across the world, including him, are all set and excited to watch the battle of two of the best cricket teams. The guy who became a social media sensation overnight because of one video has again shared a video related to the match that we are all excited about. In his typical style, he has asked the fans if they are ready for the thrilling battle.

The “Maaro Mujhe Maaro” guy’s real name is Momin Saqib. The British-Pakistani student had earlier been named as the Youth CVOID-19 Hero by the Commonwealth. He became a social media star in 2019 when he released a hilarious video after Sarfaraz Ahmed lead Pakistan team lost to India in the World Cup.

In another video that Momin shared recently, he said that he would be watching India vs Pakistan game live from the Dubai International Stadium.

In the first match of the Group stage of the T20 World Cup, the Indian team will face Pakistan. The match would be held in Dubai International Stadium on October 24.