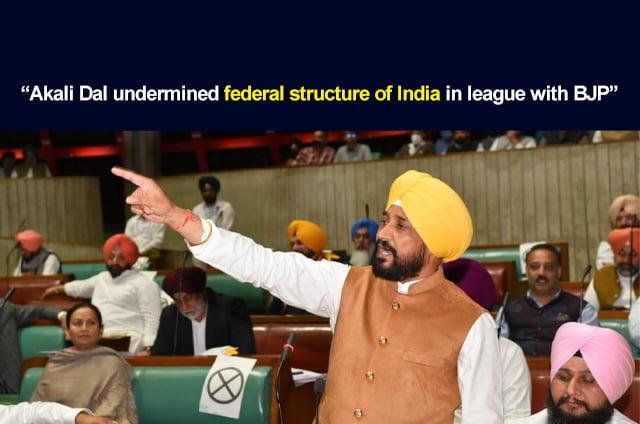 Taking the attack right into the Akali rank and file, the Punjab Chief Minister Charanjit Singh Channi on Thursday termed it as unfortunate that the Shiromani Akali Dal (SAD) always saw everything through the narrow prism of politics especially the issues of utmost importance to Punjab such as devolution of more powers to states, transfer of Chandigarh to Punjab, besides the Sri Anandpur Sahib resolution.

During his speech on special assembly session, the Chief Minister said that Akalis were the gateway through which the RSS, which has always been inimical to the interests of Punjab, managed to make inroads in the State.

“When the RSS and its political wing the BJP undermined the federal structure of the country by revoking the Article 370 not only did the Akalis took sides with the BJP but the SAD President Sukhbir Singh Badal spoke in favour of the move and even went to the extent of not voting against the undemocratic move”, added Channi.

Channi said that his meetings with Home Minister Amit Shah and PM Narendra Modi were a courtesy call.

“Perhaps the akalis have chosen to forget very conveniently that I wrote letters to the Union Government emphasizing the reopening of the Sri Kartarpur Sahib corridor besides pleading with it repeatedly to roll back the three draconian agricultural farm laws which are striking at the very roots of the farming sector which forms the backbone of our agrarian economy.”

The Chief Minister further apprised the house that in his meetings with the Union Government on security issues he always took the consistent stand that international borders should be sealed so that drugs could not enter Punjab.

“I never ever asked them to increase the jurisdiction of the BSF in the Punjab which I am being falsely accused of,” Channi said.

He also said that the Akalis were power-hungry people who cry hoarse in the name of people’s issues but always turn a blind eye when in power. Calling the SAD as the party adapt at practicing use and throw policy, the Chief Minister said that the Akalis joined hands with BSP just to come into power, and left BSP when BJP came into power in Centre.