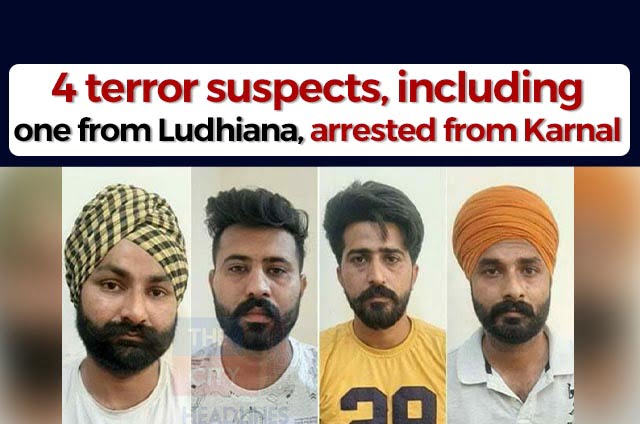 Four suspected terrorists have been detained in Karnal in a joint operation by Punjab and Haryana police on Thursday, May 5. Four of the accused have been identified as Gurpreet, Amandeep, Parminder and Bhupinder. Three of them belonged to Ferozepur and Bhupinder belonged to Bhattian village of Ludhiana.

According to Punjab Police, “In an intelligence-led operation, Punjab Police and Haryana Police arrested 4 persons today at Karnal with the recovery of 3 IEDs weighing 2.5 kg each and one pistol. Further investigation is on.”

During a blockade in the area under the police station Madhuban, four suspected terrorists were arrested. They were in an Innova car. The bomb disposal squad also reached the spot to handle the situation.

As per the sources, the car was going from Punjab to Delhi and on the basis of the input, the police overpowered them.

As per the reports, Gurpreet is the key accused and he used to supply arms and explosives throughout India. The police officials also said that they had links with Pakistan. They were allegedly taking orders from a Babbar Khalsa terrorist Harvinder Singh Rinda.

They were going to deliver arms to Telangana

According to the police, the explosive material recovered was going to be supplied further to Adilabad, Telangana. Also, they had already delivered two consignments which were sent from Pakistan through drones, the police sources informed.

At present, the investigation of the entire case has been intensified by the police and investigating agencies.

Satender Kumar Gupta, Karnal Range Inspector General of Police reportedly said that the accused were acting as couriers and transporting these ammunitions. They would be produced before the court and taken on police remand. After that, they would be questioned further.